I Am Still Attracted To Tonto Dikeh—Solidstar 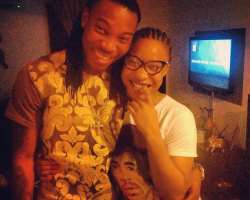 The rumour about Solidstar and Tonto Dikeh being romantically linked broke out when pictures of the two entertainers together in the studio found its way to the internet.

Nollywoodgists.com recently caught up with Solidstar and in an exclusive chat with us, the dancehall singer opened up on his relationship status, his relationship with the actress-cum-musician (Tonto) and his association with women.

“I just want to be single right now jare, girls and their problems. Whenever I come across them, I play with them, I pop with them. I am a very free and lively person. Tonto is my crush, I like her very much, she is a jovial and playful person. She comes to my place and I also do same. She is my friend and acts like a sister to me”, he said.

Meanwhile, Solidstar recently appeared in a music video of an up and coming artiste, NonnyD in the single entitled 'Sade (remix)'.