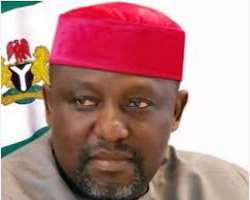 Prince Bob Njemanze, one of the 3-man delegates to the ongoing National Confab, in Abuja nominated by Imo state government has expressed dismay over the rejection of free secretariat and other logistics provided by Owelle Rochas Okorocha to the South-East delegates by his fellow delegates just because their various state governors told them to do so.

He stressed that when the delegates from the South-East were initially looking for an office which will serve as their secretariat they made some contacts and Imo state governor Rochas Okorocha in his goodwill provided a comfortable secretariat at Imo state Liaison office, provided vehicles and other necessary logistics for the South-East members of the confab led by Senator Ike Nwachukwu.

He added that the members being influenced by their governors rejected the secretariat and opted for an alternative secretariat which will cost some money.

Bob Njemanze stated that, to his surprise, those governors who influenced the rejection of the accommodation donated by Rochas Okorocha because APC and PDP political permutations and intrigues did not provide any alternative secretariat, fund and logistics to rent an accommodation elsewhere in Abuja.

He said Senator Ike Nwachukwu who is the leader of the delegation in his own wisdom used his money to rent a secretariat for the South-East delegates and the office is still in need of other logistics materials like vehicles. He said that Imo delegates are not happy with this development but Senator Ike Nwachukwu pleaded and appealed to them to work together for the interest of the Igbos.

He said that he did not want to mention some of the major issues Imo and other Igbos would like the conference to address in public for some reasons until when the time comes for that.

He advised that National confab is far beyond party politics that Igbos should cooperate with other delegates to address the issue of marginalization of the people of the South-East for the general interest of the masses.

The Elder statesman hinted that though Dr. Ezekiel Izuogu is the leader of the Imo delegates but the delegates from the South-East in their own wisdom comes together to speak in one voice and to get the maximum benefit for organizing such conference.

He appealed to the well-meaning people of the South-East and Igbos to assist them to provide the necessary logistics in the secretariat.

When he was asked if it's true that Governor T.A Orji of Abia state because of his position as the chairman of South-East Governors' forum imposed Senator Nwachukwu on them, Chief Njemanze opined that it was not true. That it was the delegates in consensus that selected Nwachukwu to be their leader and Monsino Ike Obiora as his deputy.

He added that Senator Nwachukwu is the leaders of South-East delegates and effort are being made to reach other Igbo delegates to form a common front and approach other regions for possible understanding and harmonization of some critical issues when the need arises. As he said, 'Sen. Ike Nwachukwu is a big access to the people of south East and Nigerians in general' and advised people to stop evil antagonism and foul language.

Bob Njemanze also emphasized that the Monday's deliberation mainly centered on rules and regulations that will guide the conference to achieve maximum result.