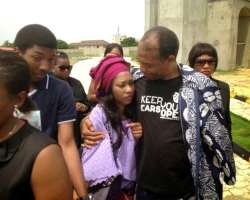 The baby was named 'Kalyami Rain Oluwaseunara' by her parents. Kalyami was born in the wee hours of Saturday, March 15th, 2014.

Kayswitch has purportedly vowed to give her the best things in life and, also, revealed he is not getting married anytime
soon.

Recall that NFC has been consistent in updating readers about happenings as it concerns both lovebirds prior to this latest event.

This seems to be a season of 'child christening' by our artistes. In recent weeks, the first was Seun Kuti, one of the sons of the late Afro-beat king, Fela Anikulapo-Kuti, next was Sound Sultan, and, now it's the turn of Kayswitch.

The puzzle reads: Who is next?