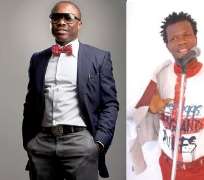 Widow wife of late comedian Chibuzor Ajaoku popularly known as Abagana, has hipped encomium on ace comedian Julius Agu and Dauda for their enormous generosity since the demise of her husband.

Abagana who is Julius Agwu's protege in the comic profession, died suddenly on January 24th 2008, leaving behind a wife and one year old daughter. Many of his colleagues made a promise to his wife to be there for the her and daughter but only Julius Agwu and Dauda did take care of them.

Julius even payed for her school fees to finish law recently.

She said: "Julius Agwu has truly shown that he is Abagana's father and mentor. In fact he paid for my law school. When he said it, I did not believe it until my alert convinced me. Dauda has also been there".