The Story Of A Nigerian Minister Of Death, Scam and Reckless Statement 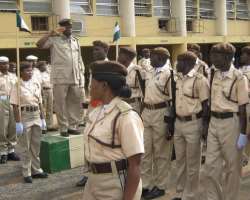 Saturday 15th of March 2014 will go down in the history book of Nigeria as a BLACK SATURDAY. It was a day that started with much hope, especially for the hundreds of thousand unemployed graduates who trooped out to different locations across the country to write the sham called Nigerian Immigration Service (NIS) Recruitment Test; a day many would wish they had fallen ill, got drunk, slept off or bedridden to prevent the stress and pain they suffered in the name of writing the assessment test arranged Interior Minister, Abba Moro and co.

On that fateful day, Nigeria lost four (4) pregnant women to the shameful and incomprehensible act of the Ministry as well as the nation's Immigration Service. The deceased could actually be counted as eight (8) because they died with their unborn babies. Possibly, one or two were carrying twins or triplets. What a colossal loss!

According to reports, several applicants collapsed due to pandemonium, excessive heat and suffocation. For our stadia, they looked as though a major sporting event was ongoing. At the end of the day, eighteen (18) people were confirmed dead. Has anyone thought about the fact that this figure could be linked to the date itself - '15/03' (15+3)?

It is disheartening that future leaders were once again wasted as a result of greed and incompetence of one man, Abba Moro. Despite stating earlier that the test was to be written by 520,000 applicants for available 4,500 job slots, more were shortlisted to sit. Eventually, nearly 1million desperate job seekers rushed to the venues. It is pertinent to note that each candidate paid N1,000 to apply, thus, about N1billion was generated from poor citizens.

As expected of any responsible public servant, we thought the 'Honourable' Minister would have come out to apologize to Nigerians and mourn the departed souls. Rather, Abba, whose name sounds like noise, chose to tongue lash, he blamed them for their untimely journey to six-feet below.

In his words: "The applicants lost their lives due to impatience; they did not follow the laid down procedures spelt out to them before the exercise. Many of them jumped through the fences of affected centres and did not conduct themselves in an orderly manner to make the exercise a smooth one. This caused stampede and made the environment unsecured" HABA MORON!!!

This is a man accused of gun-running and smuggling of arms in 2012 by a civil society organisation, National Anti-Terrorism and Peace Network (NATPW). The group stated that it received the intelligence from an unnamed source in the secret service. It further expressed shock that a man with dubious morality and questionable character could be appointed into any sensitive position in the country.

Again, Abba Moro was accused by the same group of moving about with a short service pistol without permission or presidential directive to bear arms, while serving as Chairman of Okpokwu Local Government Area, Benue State, between 1999 and 2007. He was subsequently arraigned before a court of law.

To make matter worse, such a man with no compassion for human lives is seeking to become Governor of his State in 2015. His benefactor, Senator David Mark, is reportedly planning to ensure the position is zoned to the Idomas.

In countries where things are done properly, by now, the minister should have resigned or sacked immediately. Since none of these has happened, we make the demand: Abba Moro and other officials responsible for shabby organisation that caused the stampede and needless deaths that accompanied it, must leave office now!