UCT To Honour Trailblazers In Medicine, Science And Arts 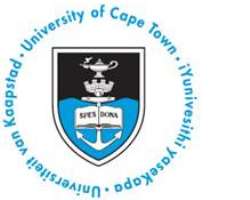 In 2014 the University of Cape Town will award honorary degrees to eight world-renowned figures for their significant contributions in their respective fields. This year's honorands are:

· Professor Henry Louis Gates: one of the foremost public intellectuals in the USA

· Dr Michael Thackeray: pioneer in several of the major advances in energy storage, and a world leader in lithium batteries

These recipients will be honoured at either the June or December graduation ceremonies.

Dr Carmichael is an economics graduate of Yale, Princeton and Oxford who came to South Africa in the mid-1970s as head of the Ford Foundation's Office for the Middle East and Africa. Under his leadership in South Africa, the Ford Foundation played an important role in supporting a wide range of individuals and organisations working in civil society, both inside and outside of the universities.

The Ford South Africa programme supported human rights (including labour rights), organisational transformation of the historically white universities, alternative education programmes and other dimensions of a society struggling for democracy.

Dr Carmichael used his sound understanding of the potential of think-tank type organisations in repressive societies. He led a shift from economic modernisation theory to supporting the full set of institutions characterising an open democratic society in the Ford programme in South Africa. This nomination recognises Dr Carmichael's significant contribution to the life and mission of UCT and to the wider South African society, notably in the fields of education and law.

With a strong academic background in radio astronomy and theoretical physics, Dr Fanaroff has raised awareness of both science in South Africa and the country's ability to contribute to the global scientific community. He helped support the growth of astronomy and the launch of radio astronomy at UCT, through the South African Square Kilometre Array (SKA) Human Capacity Development programme. This forms part of the broader SKA endeavor and has benefited UCT hugely.

Dr Fanaroff also had a hand in setting up the Metal & Allied Workers' Union, which later became the National Union of Metalworkers, as one of the largest and most influential unions in the country. He was a member of Cosatu's executive committee and held various positions in government, including that of Deputy Director-General under President Nelson Mandela.

Dr Fanaroff will be honoured for his scientific reputation, diplomatic skill and his huge commitment and efforts in getting a major part of the SKA to South Africa.

Mr Kentridge is one of the most successful South African artists of his generation and is acknowledged worldwide. He has exhibited or staged productions in major cities and galleries around the world, including New York, Kyoto and Paris. His work has been acclaimed globally and his awards include the Carnegie Medal, the Kyoto Prize and the Commandeur des Arts et des Lettres.

Over the past 25 years Mr Kentridge has matched his growing stature as an artist by an increasing presence as a public intellectual. He is extraordinarily well-read in the visual arts and music as well as politics and history. He is an excellent public speaker on the arts and on South African and global politics.

Recently he was invited to give the highly prestigious series of Norton lectures at Harvard University. One of several reasons to honour Mr Kentridge is his achievement as an artist whose extraordinary versatility and inventiveness have stunned audiences around the world.

UCT alumnus Professor Douglas is an outstanding neuroscientist who spearheaded major advances in his field. He assumed a critical leadership role in the international neuroscience community and continues to influence the global trajectory in elucidating brain function. He has revolutionised the understanding of cerebral cortex functioning, through anatomical and computational studies of the visual cortex.

Professor Douglas is recognised for his ability to combine skilled bench work with computational and theoretical approaches based on emerging technologies. One of the most profound influences he exerted was through the development of the 'canonical microcircuit'. He and colleagues established a fundamental functional microcircuit of the visual cortex. The importance of this achievement is still recognised today and is further corroborated by recent publications in Nature Neuroscience (2013) by independent researchers.

He has also developed software, available in the public domain, to assist neuroscientists in unravelling patterns of synaptic connectivity in brain tissue. Professor Douglas has supported and launched many careers in neuroscience, having supervised over 40 PhD graduates. UCT notes his achievements and close ties over the years with the Department of Human Biology at UCT, through enabling special study periods and sabbaticals at the University of Oxford and at The Institute of Neuroinformatics in Zurich.

Mr Fanning is regarded as one of the most distinguished international media figures UCT has ever produced. For 30 years he has been the founder and Executive Producer of FRONTLINE, the US's longest-running public television investigative documentary series, distinguished for its excellence, independence and integrity.

The nomination recognises Mr Fanning as a cultural figure of enormous significance in maintaining and extending the tradition of investigative documentary journalism. He is committed to making his work accessible, having spent his professional life in the Public Broadcasting Service. An early adopter of the internet, FRONTLINE has since 2000 streamed most of its documentaries for free. Mr Fanning and the series have been recipients of all of the important journalism awards in the USA.

Some of his many awards include: Harvard University's Goldsmith Career award for Excellence in Journalism; many Peabody, duPont-Columbia University, and Banff Television awards; 65 Emmy awards, and in 2013, the prestigious National Academy of Television Arts and Sciences Lifetime Achievement Emmy Award.

Mr Fanning made his first documentary films in South Africa (including Amabandla AmaAfrika and The Church and Apartheid) before moving to the USA. He retains strong connections with South Africa and a number of distinguished South African broadcast professionals have worked with him over the years.

Professor Gates is one of the USA's foremost public intellectuals. He is a reputed literary critic, educator, scholar, documentary maker, writer and editor. Apart from teaching at other prestigious universities, Professor Gates is also the Director of the WEB du Bois Institute for African and African American Research, and the founding Director of the Hutchins Center for African and African American Research. He was instrumental in establishing the Harvard Mandela Fellowships at the Du Bois Institute, which have supported the sabbatical studies of several UCT academics at Harvard University.

The major focus of Professor Gates' work has been the figure of the African-American in American and global literature and politics. Driving his writing is an abiding concern with the perception of the historic diminution of blackness in the everyday world. He seeks to show the contribution to society and culture made by people within this demographic.

Professor Gates has consistently sought to show how important it is for scholars to develop a better understanding of how racism has blighted modern society.

His writing comprises several works of literary criticism, including: Figures in Black: Words, Signs and 'Racial' Self, The Signifying Monkey: A Theory of Afro-American Literary Criticism, Colored People: A Memoir and The Future of the Race (which he co-authored with Cornel West). He currently is Editor-in-Chief of The Root.com, a daily online magazine focusing on issues of concern to the African-American community. UCT believes that Professor Gates' record of scholarly achievements, coupled with his commitment to Africa, makes him a deserving candidate for an honorary degree.

Professor Abdool Karim has been nominated for an honorary degree in recognition of the international impact of his ground-breaking research on the fight against HIV/AIDS. His work epitomises the momentous contribution that innovative multidisciplinary science and medical technology can make to disease prevention, treatment and global health.

His highest-impact scientific discovery was the effect of tenofovir gel, as a microbicide, in preventing both HIV and genital herpes. This landmark study, which he co-led with his wife, provided the first evidence that antiretroviral drugs can prevent sexual transmission of HIV infection. The finding has been heralded by the Joint United Nations Programme on HIV/AIDS (UNAIDS) and the World Health Organisation (WHO) as one of the most significant scientific breakthroughs in the fight against AIDS, and was ranked among the Top 10 Scientific Breakthroughs in 2010 by the journal Science.

Research teams that he has led, have generated new insights into HIV immunity to help overcome some of the obstacles to HIV vaccine development. He is co-inventor of three patents which have been used to develop several HIV vaccine candidates. His clinical research on TB-HIV treatment has shaped clinical management of co-infected patients and serves as the basis for TB-HIV treatment guidelines in several countries.

As a global leader in AIDS, Professor Abdool Karim Chairs the UNAIDS Scientific Expert Panel and is an advisor to the WHO and Gates Foundation amongst others. Recently, he led the revitalisation of the Medical Research Council to restore it as the premier medical research body in South Africa.

Dr Thackeray has significantly impacted the field of energy storage by inventing and developing new electrode materials for battery systems as well as translating these materials into viable technologies. As a world leader, he has pioneered several major advances in metal oxide electrodes for lithium batteries, notably manganese-oxide spinel materials now used in electric vehicles such as the Chevy Volt and Nissan Leaf.

The UCT alumnus previously headed up the Battery Department at the Council for Scientific and Industrial Research, where the ZEBRA battery was invented, before being invited to join Argonne National Laboratory in the United States, where he is a Distinguished Fellow and the Director of the US Department of Energy's 'Center for Electrical Energy Storage'. He has authored more than 180 publications and holds 51 patents, many of which have been licensed to industry worldwide. As a scientist, his h-index value of 63 (with over 12,000 citations of his publications) puts him in the very top tier. He is listed on the Thomson Reuters Highly Cited Researcher List. Dr Thackeray has maintained his relationships with South African scientists, including those at UCT. He has emerged as a world leading expert in battery research over some 40 years, making him a worthy candidate for an honorary degree from UCT.