TB Joshua Should Be Arrested For His Boko Haram Stunt 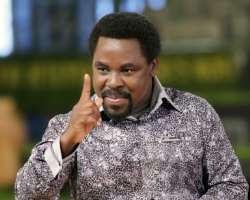 Back in 2011 TB Joshua used the Boko Haram crisis to make a name for himself by claiming that they would be long forgotten about a few months into 2012. Sadly this prophecy has proven completely wrong, but it hasn't stopped him from continuing to exploit the crisis for his own gain. This time, in one of his sunday circuses services a self-proclaimed Boko Haram member confessed that he had come with 4 accomplices to bomb SCOAN. To avoid being accused of misreporting, here is the video and this is the SCOAN report of what happened:

Nearing the end of the service, Prophet T.B. Joshua announced that a young man had a confession to make. The man by the name of Mustapha confessed that he was a member of the Boko Haram sect, which he explained was a cult. He admitted that his initial mission to The SCOAN was to place a bomb in the vicinity with the intent of killing hundreds. Mustapha, who said he was accompanied by four others, had the explosives hidden in a bag. They sat down to eat at a restaurant very close to The SCOAN, explaining that Emmanuel TV was playing in the background as they ate. At that moment, Prophet T.B. Joshua's prayer for viewers began airing.

[... edited for brevity...]
Several hours later, T.B. Joshua readdressed the issue and brought the young man forward again, stating that God had warned him of the impending attack several weeks ago and that he had been engaging in intensive prayers for the past fortnight. 'It was not a surprise to me because I have seen it. My mission is to separate him from the spirit that is controlling him to do that. We are not to fight mere flesh and blood,' he explained.

As Prophet T.B. Joshua prayed, the Boko Haram member fell on the floor before beginning to vomit some strange substances. There was a tattoo of a scorpion clearly visible on his shoulder, which Mustapha explained was a sign of the cult. He further explained that this was the first mission he went on where this had happened as he had never failed before. After praying for him again in the power of the Holy Spirit, the young man fell once more to the floor. Upon getting up, tears were in his eyes. 'The spirit leading him to kill is gone,' Prophet T.B. Joshua declared! We thank Jesus Christ for this mighty deliverance.

Notice how the man is brought forward twice, several hours apart. That means this man who has just confessed to coming to SCOAN to kill hundreds of people, and has yet to have the demon leading him to kill cast out (if you're to accept the SCOAN narrative) is free and unrestrained for hours among the group of people he planned to kill!

His accomplices are still running free, probably with the bomb. How has the service been allowed to continue if this was a genuine threat? If there was an ounce of truth to this story, the authorities would have been immediately called as soon as the guy came forward, why would they keep a confessed killer and terrorist around for hours, unrestrained for a live confession and deliverance?

In case it's not obvious enough by now that this was all a foolish and deceptive stunt, the Lagos State Commissioner of Police,Mr. Umar Manko has described the claims as baseless. We commend Mr Umar for speaking out and dispelling the nonsense, but this should not stop here. According to SCOAN, they had a terrorist in their midst. TB Joshua needs to be taken into police custody and questioned about this. If there is any truth to the claim, the man and his accomplices will be arrested and tried, and TB Joshua should be cautioned for not immediately turning him in to the authorities. If the claims turn out to be completely false, TB Joshua should be arrested and tried for wasting police time and creating a bomb scare.