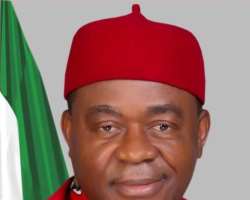 The state government has observed that some individuals and groups have been pasting campaign posters and billboards of Chief T.A. Orji for the Abia Central Senatorial seat ahead of 2015 without due authorisation, a situation the Governor had earlier spoken against.

A statement by the Chief Press Secretary to the Governor, Mr. Charles Ajunwa, says the government views the act as improper, as the governor is yet to make his position known on the matter or authorise the pasting of his posters.

Mr. Ajunwa advises all those engaged in the indiscriminate pasting of such posters and billboards to stop the act forthwith.

Ajunwa says while the state government appreciates the outpouring of love and acceptability of the Governor by the great majority of Abians, it wants them to be patient and wait for the appropriate time to demonstrate their kind feelings towards their governor.