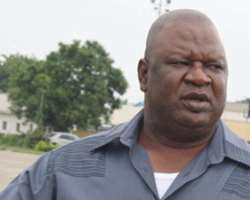 
The federal government has launched a 90-day lottery programme as part of the activities designed to reward Nigerians in commemoration of the country’s 100 years celebration.

The Secretary to the Government of the Federation (SGF), Senator Anyim Pius Anyim, who announced the three months programme yesterday in Abuja, said a N100million star prize, in addition to 90 Hyundai cars and other consolation prizes were to be won on a daily basis.

Anyim listed some of the consolation prizes to include tricycles, generators, smart phones, television sets, and freezers among others, which would be given out to lucky winners.

“In addition to the daily draws, there would be weekly bonus prizes of N5million, which will be aired on the Nigeria Television Authority (NTA) at 8pm daily. Nigerians are expected to text QP to 35777 to participate in the lottery”, he said.

The SGF however urged the organisers to ensure transparency and fairness in the conduct of the whole programme, warning that “the integrity and involvement of all the stakeholders was at stake if the entire process was flawed”

“You must make fairness and transparency your watch words through out the duration of the centenary lottery”.

“The lottery stands out as one programme that all Nigerians can participate in, it also stands out as a means to give back to Nigerians and bring the benefits of the Centenary celebration home to many Nigerians,” he added.

Also speaking, the Minister of Culture and Tourism, Mr. Edem Duke, urged Nigerians to take advantage of the lottery to remind themselves about the significance and symbolism of the centenary anniversary.

According to Duke, the lottery questions would be tied around historical events in Nigeria. Meanwhile, the lottery is being facilitated by Secure Electronic Technology(SET) Plc, in collaboration with the major telecommunication providers such MTN,Etisalat,Glo,Airtel and Visaphone.

Other stakeholders in the lottery include Nigeria Lottery Regulatory Commission (NLRC), Nigeria Communication Commission(NCC), Ministries of Culture and Tourism and Communications.

Representatives of the various telecommunication providers all pledged their support to ensure that the lottery runs smoothly.