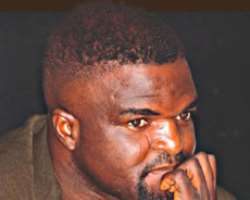 
Popular fuji musician, Abass Akande, better known as Obesere, has denied the rape allegation leveled against him, claiming that he and the lady had a mutual sex.

Earlier in the week, one Olanike   Olaiya, a National Diploma graduate of business administration from Ibadan Polytechnic, had reported to the police that the artiste forcefully had sex with her and in the process, inserted a ring into her private part which caused her to bleed.

Speaking to Saturday Beats later in the week, Obesere admitted getting to know the lady recently but said the sexual aspect of the relationship was consensual.

'A friend of mine, Alhaja  Bola Omowo introduced Nike  to me barely two weeks ago. Obesere Rising, a product, is coming to Nigeria, Alhaja told me that Nike would want to be one of the marketers. From there, we became friends.'

Obesere denied asking Nike to sleep over in his house as she reported in her petition.

'She spent two days in my house and she felt at home. So, how could I have raped her? Why didn't she shout while I was 'raping' her?  She was the one that went to the kitchen and cooked and I ate all she prepared in those two days.

'Why would I force any lady to sleep over in my house when there are so many other ladies begging to sleep in my house?  I took her as my girlfriend and a sister. I even left her at home and went out the second day. She was the one that called me while I was away that she needed to get to Ibadan.'

Obsere said he was surprised when the lady called him to say she was ill.

'She said she was seeing something strange in her body. I told her to tell Alhaja that introduced her to me to take her to the hospital. She said she didn't want to do that as Alhaja might broadcast it to everybody that she slept in my house. I called Alhaja and she told me nothing was wrong with Nike. Alhaja eventually asked me if I was a 'mugu.'  Alhaja was the one that told me that Nike had suggested a plan for the two of them to blackmail me of N5m to N10m. I am a street guy; I am not a 'mugu.'

Obesere said he took Nike to his doctor who also confirmed that nothing was wrong with Nike.

'My doctor however suggested she go for scan and my boys took her back to the hotel in order for her to go to the lab the next day. It was later that day that my gateman called me to say police had invited me to the police station. I told my lawyer to go. He was the one that told me the girl was set out to embarrass me.'

When Saturday Beats asked the singer where his wife was during the incident, he said she understood his kind of life and assured that the allegation wouldn't affect his marriage.

'That is why God is God. It is only God that is perfect. My wife is aware of this mess. She understands the kind of job I do and she knows such things happen. My house is intact; nothing can destroy it. I am going to sing about it. This lady has already made me more popular,' he said. Punch