Pistorius cheated on me, says ex-girlfriend 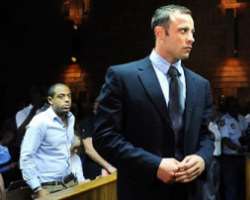 
An ex-girlfriend of Oscar Pistorius broke down in court today as she described how the athlete cheated on her with Reeva Steenkamp.

Court proceedings were halted after Samantha Taylor described her relationship with the defendant on day five of the trial.

Miss Taylor described occasions when Pistorius screamed at her 'out of anger'.

She said that he nearly always kept a gun on him and once became very angry when police stopped a car he was travelling in.

Pistorius, who was allegedly passenger in the car, fired his gun out of the sunroof about 15 minutes after the vehicle was pulled over by police.

She said that after being stopped by the police, Pistorius was 'very angry' but later joked about wanting to 'shoot a robot' - a traffic light.

Miss Taylor said that after shooting the bullet through the sunroof, Pistorius laughed. The athlete wanted to 'irritate the police'.

She said that she normally spent four nights a week at Pistorius's home. He often used his mobile phone late at night and sometimes his iPad, Miss Taylor said.

Ms Taylor gave her evidence after radiologist Johan Stipp was questioned by defence lawyer Barry Roux at the trial in Pretoria.

Pistorius arrived at the court building shortly after 7am and is expected to hear more harrowing testimony from prosecution witnesses in the case.

Yesterday Mr Stipp described how Pistorius knelt at Reeva Steenkamp's side and struggled in vain to help her breathe by holding two fingers in her clenched mouth.

Mr Stipp said he went to Pistorius' home after hearing shots fired on the night Ms Steenkamp was killed and found 'a lady lying on her back'.

'I also noticed a man kneeling on her side, on the left side. I remember the first thing he said when I got there was 'I shot her, I thought she was an intruder. I shot her,'' Mr Stipp told the court.

He said he did not recognise Pistorius, and described how he tried in vain to resuscitate Ms Steenkamp.

'She was clenching down on Oscar's fingers as he was trying to open her airway.

'I tried to do a jaw lift manoeuvre, to try to open the airway, but it was very difficult with the clenching down.

'All during that time, there wasn't any signs of life that I could see.

'I opened her right eyelid. The pupil was fixed dilated, and the cornea was milky - in other words, it was already drying out.

'So to me it was obvious she was mortally wounded.

'I looked at the rest of her body and I noted she had a wound in her right thigh, also a wound in the right upper arm.

'During that time … Oscar was crying all the time. He prayed to God to 'please let her live, she must not die'.

'He said at one stage while he was praying 'he will dedicate his life and her life to God if she would just only live and not die that night'.'

He added that Pistorius looked 'sincere': 'He was crying, there were tears on his face. He was actively trying to assist her.'

Sky's Alex Crawford, who was in court, said Pistorius was openly sobbing as the evidence was given.

Earlier, Pistorius' defence team said it would have been 'impossible' for neighbours to hear screams on the night Ms Steenkamp died.