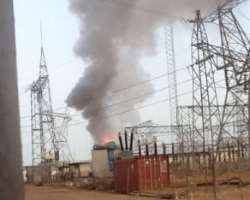 
Fire broke out early Friday morning at the  National Control Centre of the Power Holding Company of Nigeria in Osogbo.

Our correspondent gathered that the fire, which affected a transformer there, started around 3am.

The NCC, Osogbo, is one of the transmission centres for the distribution of generated electricity in the country.

Fire fighters were seen battling the inferno when our correspondent visited the scene at around 7am.

The fire raged till around 9am when it was contained.

Members of the Nigeria Security and Civil Defence  Corps, soldiers and staff of the Federal Road Safety Commission were controlling vehicular and human traffic at the centre.

The incident, which is expected to worsen the already epileptic power supply in the country, has already thrown many areas within the state into darkness.

The Deputy Governor of Osun State, Mrs. Titi Laoye-Tomori, was among those who had visited the place. Punch