The innocent blood you shed will work against you, Al-Mustapha tells terrorists 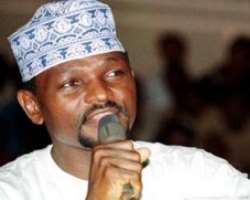 
Sponsors of the dreaded Islamic sect, Boko Haram, have been urged to desist from their wicked and damnable acts or be prepared to face the wrath of both God and the full weight of the law.

'The perpetrators and sponsors of this dastardly act should know that the innocent blood they shed on Nigerian soil will definitely work against them', Al-Mustapha said. He roundly condemned the recent massacre of innocent students of Federal Government College, Bunu Yadi, by Boko Haram insurgents, stressing that such act was bad to extreme.

In his own address, the Chairman, National Population Commission, NPC, Chief Eze Duruiheoma, SAN, said Nigeria is beset with myriad of problems, which pose great challenges to the peaceful coexistence and welfare of the Nigerian people.

'The increasing rate of armed robbery, kidnapping and other serious social vices is no doubt a product of the growing unemployment rate in the country', Duruiheoma reasoned. While saying that solving this gigantic task of unemployment is beyond what the Federal Government alone can undertake, Chief Duruiheoma also opined that it requires the patriotic intervention of all stakeholders and well meaning Nigerians.

'The provision of employment is one sure way of improving the quality of the population that will complement the laudable goals of the NPC. For an intervention project of this nature, there will be need for accurate and reliable demographic data for planning purposes', Duruiheoma said. Vanguard