How I escaped death, by Gov Nyako 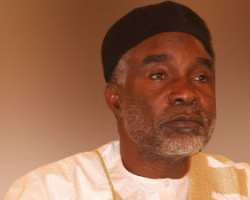 
Governor Murtala Nyako of Adamawa State, who survived a gun attack, on Friday, in Shuwa, yesterday, narrated his narrow escape. Nyako defected to the All Progressives Congress, APC, last December along with four other Peoples Democratic Party (PDP) governors. He said it was by the grace of God that he escaped the bullets fired by some men close to a military checkpoint.

Speaking through his Director of Press and Public Affairs, Mr. Ahmed Sajoh, the governor said he was convinced the assailants wanted to eliminate him given that the attack happened in broad daylight. Sajoh said the governor and his entourage were about to depart Shuwa at about 12:33pm after addressing some  victims of a terror attack when Nyako noticed some people across the road close to a military checkpoint. The aide explained that as Nyako made to cross the road and greet some  men and women, who had gathered to receive him, some unknown gunmen started firing at him.

'Before the gunshots started, we heard, 'Ga su nan, ga su nan', as soldiers at the checkpoint ran menacingly towards a stationary armoured vehicle. 'The gunfire came  from the direction of the soldiers, ' Nyako's spokesman claimed. 'The sporadic shooting created so much tension and confusion that everyone made spirited attempts to board his vehicle.

'The courageous and gallant security details around the governor pulled him off his official car into one of their vehicles. 'As an ex-military man, Nyako was trying to identify the source of  the fire and he was unperturbed. 'The top military officers accompanying the governor on the visit  were also protected by their security details.

It was an interesting scenario. Other people around  made spirited efforts to board their vehicles while others just jumped into the back of any vehicle especially pick up vans, to escape being hit by bullets. 'The governor was forced by the gun attack to cut short his sympathy visit to the terror  victims and returned to Yola, the state capital, at about 1.00pm.

Although it was a Friday when the governor and other Muslim faithful would have stopped to observe their prayers in accordance with Islamic injunctions, the bullets forced everyone to scamper for his life and nothing of such was remembered.

The governor's spokesman said before the gunfire erupted, his principal was received at the border of Michika Local Government Area by a large number of people including community leaders and traditional rulers. Members of the community were said to have lined the street waving at the governor. The damage recorded in the town was reportedly monumental.

A  journalist resident in Michika, Mr. Emmanuel Kwache, told Nyako he was a victim and that he lost five rooms in their family compound, seven bags of maize, two bags of beans, two bags of groundnuts, one pick-up van loaded with soft drinks and personal effects. Others had far greater losses.