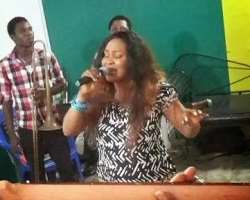 After being reported to have gone underground for a while in the city of Port-Harcourt after marriage to her hubby.
Also Muma Gee's picture was posted online looking pregnant while performing a live show
Wishing you safe delivery ma'am.!