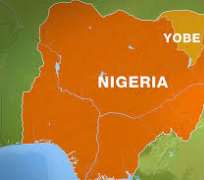 
The Association of Senior Civil Servants of Nigeria has declared Monday, March 3, a Day of Mourning and work free day in the 104 Federal Unity Colleges throughout the country.

The decision was in honour of 30 students of Federal Government College, Muni Yadi in Yobe State who were murdered by Boko Haram insurgents on Tuesday, February 25.

Education Officers and senior members in the FUCs are members of the ASCSN.

A statement issued on Friday by the Secretary-General of ASCSN, Mr. Alade Lawal, stated that the leadership of the union decided to use the day to mourn the students who were brutally murdered by the militants.

He said, 'We believe that this gesture is the least honour that can be accorded defenceless students who were murdered in their prime by the religious bigots. It will also send a strong signal to the Boko Haram militants that the entire society is united against its dastardly acts.'

The ASCSN emphasized that it was also a show of solidarity with the Management, Staff and Parents of the deceased students.

Lawal said the ASCSN put the casualty figure of dead students at 30 'because that is the number of death toll according to a report credited to the Federal Ministry of Education, the supervisory Ministry of the School.'