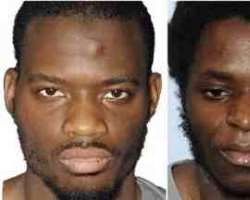 
Nigerian British men, Michael Adebolajo, 29, was given life sentence while Michael Adebowale, 22, is to spend 45 years in jail for the murder of a British soldier Lee Rigby.

The United Kingdom's Central Criminal Court 'The Old Bailey'', handed down the verdict in London on Wednesday.

Both men hacked Rigby to death on May 22, 2013 in Woolwich South East London in what they described as 'an act of religious war.''

The pair were absent during the verdict as they were ordered out after shouting and scuffling with security guards.

While sentencing the killers, Mr Justice Sweeney said they were convicted on overwhelming evidence of the barbaric murder of the soldier.

Sweeney said the men carried out the murder in a way that would generate maximum media coverage.

He added that Adebolajo was the leader of the 'joint enterprise'' and was aided by Adebowale 'enthusiastically.

'He (Rigby) had done absolutely nothing to deserve what you did to him.

'This was a murder with a terrorist connection,'' Sweeney said.

Earlier, Rigby's widow Rebecca said her young child would grow up and see images 'no son should have to endure.''

Her statement was one of those from Rigby's family, extracts of which were read out by prosecutor Richard Whittam.

She said that she had accepted her husband's life would be at risk when he was deployed to Afghanistan, but not when he was in the UK.

The sentence of the men has opened up new debate on the safety of British soldiers within the UK, and issues concerning home grown terrorists.