Emeka Ike Does Not Have Sympathy For Himself--Landlord Speaks Out 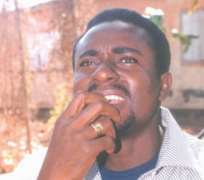 After controversies about how Emeka Ike was thrown out of his acclaimed property of a school, and all the issues that followed, if you did not read it here.........

It has just been revealed that nollywood actor Emeka Ike threatened the 86year old man who has been suffering from diabetics for 37years now. "It is my property, but Emeka threatened to deal with me over it. He refused to pay his rent, and yet wasn't ready to evacuate, despite my condition, the old man said. The Sunnewsonline after speaking with the man also spoke to the actor, but he wonders why the media is interested in his private life...Read The story below.......

The octogenarian chairman of Samak Investment Ltd, Chief Akintan wondered why the actor chose to be a pain in his neck. He said that he has sympathy for the Nollywood star, but “unfortunately, Emeka doesn't have sympathy for himself.”

According to him, his company leased the property to the actor on June 1, 2007. Before then, he said he had never heard of Emeka's name as his children were the ones that told him that he's a nollywood actor.

He said: “I never knew this gentleman from Adam. He just came to my house with his wife and I was worried about who he was and my children came to me, saying, Emeka Ike, we know him daddy; he is a nice gentleman. That is how I fell into his hands.”

He said the recommendation from his children made him enter into the lease agreement of five years which was to expire in 2012. According to him, “he was supposed to pay for the first two years N2 million each per annum and the subsequent three years N3 million per annum. The total rent for that period of five years should be N13 million. He paid N2 million for the first year and never paid again until three years later when he paid another N2.5 million. Even this N2.5 million was a tug of war before he could pay it. So, out of N13 million, he paid only N4.5 million and the balance should be N 8.5 million.”

When he wanted to take Emeka to court, he said the popular actor begged him not to do that that he would be living up to expectations.

“When I wanted to take the matter to court, Emeka wrote a letter on February 15, 2012, pleading that I'm his father and that I should halt any court process against him. Even this N2.5 million was paid in 2011, a year to the expiration of the five- year lease. After that, he issued a N1.5 million Zenith bank, Eric Moore branch cheque in my name, dated May 20, 2012, which bounced.

“Some people advised me to take him to Special Fraud Unit (SFU) of the Nigeria police; I refused because this boy is a young boy like my son, why would I do that to him; that he should leave my property.”

The relationship got worse from that moment. “After the cheque bounced, my lawyer called him over the phone, he started abusing me, threatening to deal with the lawyer and me. I never looked at what he was owing me in the past but should pay this N1.5 million. If I were to calculate his arrears, he has to pay far more but I am just satisfied with this N1.5 million.”

It was another round of battle when the matter eventually shifted to the court. Unfortunately, it was learnt Emeka's lawyer simply identified as Bashir stopped attending court sessions at a point.

“The magistrate became frustrated. The last he came, he appealed that the matter be settled out of court. The magistrate in her own initiative transferred it to multi-door court, Igbosere. They gave us appointment but Emeka didn't honour it.

“I can't walk, so the two times I went there, I was carried like a baby to the court and Emeka didn't come, but my lawyer went there three times. The magistrate at Igbosere wrote back to the one at Ikeja to go ahead with the matter since Emeka didn't come.

“We went back to the first court and after several adjournments, neither Emeka nor his lawyer put up appearance and we were asked to give our evidence and we did, thereafter, the judgment was delivered.

“To give Emeka another opportunity, we got judgment in November 22, but the magistrate in her wisdom said we should give him one month to enable him to get himself together and move out. We were supposed to take possession by December 20, 2013 but we didn't until January 24, when the Commissioner of Police gave us three policemen led by an Assistant Superintendent of Police to follow the Court Sheriff to eject him. They ejected him and put his property outside.”

When Emeka heard of this unsavoury development, he was said to have gone to Magodo police station and reported that thugs invaded his property after which the police arrested the two guards the landlord had stationed there.

“When in January I went to the premises, even the teachers complained that they had never seen him for many months and had not paid them salaries for nine months.

“While I was in Ondo, I got a phone call that Ekeka came to Lagos and went to Magodo police station and reported that thugs invaded his property. Police went there and arrested the guards and he put his own guards and locked the place.”

Sounding emotional, Chief Akintan said: “I'm a sick man; diabetic for 37 years. I will be 87 by my next birthday and can't walk. I live at the grace of doctors and what nature can allow me to have. I'm immobile. I had to come back to Lagos to start another process to dislodge him. When I spoke to the DPO, Magodo police station and tendered documents, he said, so, 'Emeka came here to tell him lies.'

“We have filed a contempt of court against him. We have taken possession of the property and about renovating it.

He is going about telling people that the place was not completed when he moved in that he put over N200 million to build it. He has done a lot of damage to the property. I sent my contractor to assess the damage; he told me that I needed between N10 million and N13 million for renovation.

“I have sympathy for Emeka, but unfortunately, he has no sympathy for himself. Emeka went to court to plead that the judgment should be set aside, that I received a kangaroo judgment; that the case should be retried. The court dismissed it, saying it was abuse of court process.

I don't know what Emeka would do again. I have never seen a character like that before.

“His former landlord, Dr Shofoluwe was in the same position with me. He is looking for Emeka to pay N3.5 million rent arrears. He was ejected legally. This is the type of man coming to trouble me now and I don't need cheap publicity.”

Speaking to Saturday Sun on the development, Emeka, wondered why the media should be interested in his private life

According to him, “there is a position now, because I don't want people who have not achieved anything in their lives to use unnecessary distractions to gain prominence. It is my money and investments and it is not a national crisis.

Maybe people who think I have a larger than life image are trying to use it to make a point and I want to handle it as legal as possible.”

He noted that there can be challenges in business, stressing that he is still in possession of the school.

He added that only two entities can close down a school, either the government or the owner of the school stressing that none of that has happened.

“I'm still in possession of the school. It is only the government that has the right to shut down the school if it feels that I'm not capable and I, as the CEO, if I feel that I can't do it again. Nobody can shut down the school and the case is in court. It should not be seen as a national crisis, I have my business in Abuja and I'm doing very well and right now I don't like distraction,” he state