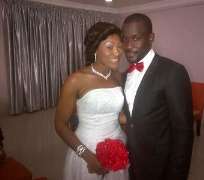 It is getting hotter for Nollywood serial lover boy, Joseph Benjamin, you need to see him with Ebube Nwagbo walk the aisle, the actress who was alleged to have moved in with Kcee last week, a story she debunk as totally false because Kcee is a married man.

However, it was in the arms of Joseph he found true love….Don't scream, it is only a movie and they looked like real couple. For Ebube, she is already sharing recharge cards to fans in celebration of her birthday.