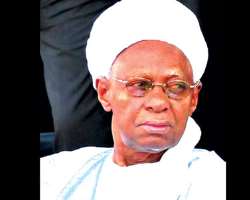 In a letter addressed to the former President at his residence in Sokoto, President Jonathan praised Shagari's continued dedication to the unity and well-being of the nation.

'On behalf of the government and people of the Federal Republic of Nigeria, and on my own behalf, I write to felicitate with you as you celebrate your 89th birthday anniversary.

'May Almighty Allah ceaselessly prosper you and bless you with robust health as you continue to give of yourself in the service of our dear nation,' Jonathan wrote.

He wished Shagari a very happy birthday and also conveyed assurances of his highest consideration and warm personal regards to the former President.

The President has also commiserated with the Emir of Kano, Alhaji Ado Bayero, on the death last Friday of the Tafidan Kano, Alhaji Tijani Abubakar.

'On behalf of the government and people of the Federal Republic of Nigeria, and on my own behalf, I write to commiserate with Your Highness, the people of Kano Emirate, and the entire people of Kano State on this sad loss,' President Jonathan wrote.

He prayed that Almighty Allah would grant the Emir, Alhaji Tijani's family and the people of Kano the fortitude to cope with the painful loss of the Tafidan.

Chairman of the governors' forum and Governor of Niger State, Mu'azu Babangida Aliyu, said yesterday in Minna that Shagari, as Nigeria's President, played politics without bitterness and placed topmost premium on the values and virtues of constitutional democracy. He described the former leader as a statesman of uncommon pedigree.

The forum, in a statement signed by Aliyu's spokesman, Danladi Ndayebo, said 'Shagari's politics eschews bitterness.   Even opponents concede that he is a disciplined man whose life symbolises a rejection of the corrupting influences that distracts the commitment of some leaders to improving the lot of the common man.'

The forum referred to former President Shagari as the greatest statesman around today and urged Nigerians to emulate his exemplary life that is characterised by honesty, selflessness and the fear of God.'

The forum said it is proud to be associated with the achievements of the former Nigerian leader, especially his contribution to the deepening of the nation's democracy. It prayed God to grant Shagari excellent health, courage and many more years of selfless service to Nigeria and humanity.

In another development, the forum is to prevail on the Federal Government to release the N10 billion it promised the committee it set up to fight desertification in 11 states of the country.

The decision of the governors to step into the matter followed the release of only N300 million out of the N10 billion pledged almost one year after the promise was made.

Chairman of the NSGF and Governor of Niger State, Babangida Aliyu, gave the hint in Minna yesterday when he received the Chairman and members of the Nigeria Frontier Action Initiative on the Environment who paid him a courtesy call at the Government House.