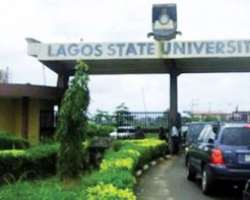 
Scores of final year students of Lagos State University, Ojo, on Monday resumed as directed by the institution's management amid tight security.

The News Agency of Nigeria reports that the students were seen discussing in groups on the campus.

The authorities had on January 23 closed down the institution following a violent student demonstration against the shutting down of the school's registration portal.

The management, in collaboration with the Lagos State Government, directed the reopening of the university for its final year students on February 24.

The Dean of Students Affairs, Prof. Kabir Akinyemi, told NAN that the university's portal had been reopened for the final year students alone.

Akinyemi said the reopening of the portal would enable them to register online ahead of their rain semester examinations.

The don said writing the examinations would also enable the final year students to participate in the June batch of National Youth Service Corps programme.

'We had to consider the final year students because they have overstayed in the school since the ASUU strike had earlier affected them.

'We do not want to prolong their graduation,' he said.

Akinyemi also said security had been beefed up in the campus to forestall any further protest.

'We do not want anybody to disrupt the resumption of the final year students as some group had threatened to do so.

'If any group wants to protest they should go to the appropriate authorities and do so, but not by disrupting academic activities in the campus,' he said.

The dean urged other categories of students to wait for their dates of resumption and also keep the peace.

'Adequate security had been put in place, while peace has returned to the institution.

'The portal has been reopened as promised by the authorities,' he told NAN.

Meanwhile, the newly-admitted students for the 2013/2014 session are to resume on March 10, while other categories of students are to report on April 1. NAN