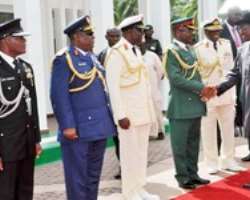 
The recent appointment of new Service Chiefs for the Armed Forces, the forwarding of their names to, and their subsequent confirmation by, the Senate are indeed a very salutary landmark in our march to constitutionalism and the entrenchment of a regime of due process in the land.

Given that it is indeed the first time since the return to democratic rule in 1999 that the relevant provision of the law outlining the process for the nomination and appointment of service chiefs has been followed to the letter, we think that it is appropriate for Nigerians to applaud: slowly but surely, the system appears to be moving in the right direction.

However, Hallmark thinks it is appropriate that we play our part in setting an agenda for the Service Chiefs and the Nigerian Armed Forces at this most auspicious time. This is because even when matters of security are in themselves matters of confidence, professionalism and sensitivity, the fact that every responsible citizen is expected to play a role - either as an observer or a purveyor of intelligence -  compels those with inputs, ideas and suggestions to pass them on.   The imperative of guided civil engagement in the military process has come to the fore in the unfortunate events of the Boko Haram insurgency in the North-East of the country, for which a state of emergency has since been instituted and the armed forces drafted to help contain. As every elementary student of the security sciences would readily confirm, the presently troubling intractable insurgency could only have developed the dimensions it has since assumed on account of preliminary failures in intelligence gathering and civil engagement.

Even in other conflict zones in the country which the armed forces have also been invited to quell, the same issues of poor intelligence gathering and the near-absence of cooperative civil population have continued to encourage the aberrant situation where almost every incidence of conflict is allowed to snowball to a level demanding the use of troops that had been trained chiefly for external combat activities.

While Section 217 (2) c of the 1999 constitution empowers the armed forces of Nigeria to be involved in quelling civil insurrection, it is clear that the intendment was only in the event of the exhaustion of the basic Police, civil defence and intelligence gathering machinery. A situation where in the past 10 years or so, troops have been randomly deployed to fight kidnapping, armed robbery, militancy, oil theft and insurgency in various troubled spots in the country may be over stretching the military.

Professionalization of the armed services
An agenda for the service chiefs and the armed forces would therefore begin with our enjoining the nation’s political authorities to adopt a comprehensive security response that would see to the reinvigoration of the Police, the SSS, the NSCDC, vigilance groups and the citizens as primary agents of security control. With this in place, the armed forces would now be left to grow its professional bases even further while reducing some of the pressure that they are currently shouldering by virtue of their current over-exposure to domestic conflicts.

It is also important that the service personnel be reminded that even when they do a singularly difficult job in these instances, they must always do their utmost to comply with the established rules of engagement, particularly as relates to non-combatants in conflict areas. The reported incidents of alleged genocide in Baga and extra-judicial killings in Abuja recently are pointers to the fact that the new service chiefs have work to do in this area. This is more so when such extreme conduct also discourages civilians from patriotically coming out to identify suspects.

We must also restate to the political authorities that they need to appreciate the basic truth that when the constitution permitted military involvement in quelling extended civil insurrection; it was in the manner and measure of last resort and not as a first option.

Ordinarily, we have the intelligence services to prevent conflict and the Police to arrest offenders and nip troubles in the bud. A poorly-equipped Police is indeed now compounding the overall security situation and the Army is now sadly almost a first course of response. This excessive militarization of the polity and the psyche of the people is not the best in the immediate and long terms.

This newspaper therefore counsels that the Police should be strengthened, better-funded and their morale raised in every conceivable way. There should be a focus on welfare, professionalism and dignity. Also, basic equipment in the form of armaments, communication gear, logistics, etc must be availed.

Overall, it should also be noted that we presently have a largely unserious security complex. Militants and criminals challenge poorly motivated troops at random while an alienated public does not play its role in the security matrix. Even security personnel have been known to be indifferent and lackadaisical in the execution of their duties. When this is not the case, some take the other extreme of being overzealous. Security is serious business and we cannot afford to trifle it.

This newspaper believes that the frequent changes at the top echelon of the Armed Forces is wasteful, demoralising and politicises the military. They are highly trained officers and should be allowed to contribute to national development. We suggest a period of not less than two years for incumbents.