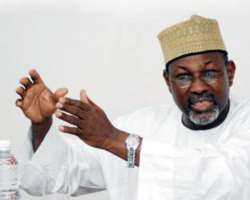 
The Independent National Electoral Commission (INEC) has confirmed that the permanent voter card will be ready for use before the 2015 general elections as the commission has now identified the card as a key instrument to conducting free and fair elections.

INEC's National Commissioner and Chairman, Information and Publicity Committee, Dr. Chris Iyimoga, said these on Wednesday during an interaction with editors on election timetable in Lagos.

Iyimoga, who said that voter registration was an ongoing exercise, explained that the commission would also use card readers to validate the identities of holders.

According to him, 60 million copies of the permanent voter cards are ready for distribution.

He said, 'We want to assure Nigerians that have registered that they will get permanent voter cards before the elections.

'Those who are just going to register will get temporary cards, which they can also use to also vote.

'We have over 60 million produced voters, awaiting distribution. So voters can use either the permanent or the temporary cards. The distribution will start soonest.'

He said the commission was prepared to curb frauds in the 2015 polls, adding that ballot papers were going to be allocated based on the number of verified voters in the 120,000 polling units across the nation.

Iyimoga also said the commission would use the forthcoming Osun and Ekiti states governorship elections to prove its readiness to make the general elections credible.

'I want people to watch out for Osun and Ekiti to assess what we are capable of,' he said.

He admitted that the conduct of the last Anambra State governorship election was a failure but added that the commission's performance 'was not too woeful.'

According to him, the commission has made representation to the National Assembly for certain parts of the Electoral Acts hampering INEC's efficiency to be replaced or modified.

He called for the establishment of the electoral offences commission to prosecute offenders.

The Director, Voter Education, Publicity, Gender and Civil Society Liaison of INEC, Oluwole Uzzi, also supported this position. Uzzi said the commission was unable to cope with the number of electoral offences nationwide because of manpower shortage.

Uzzi said, 'INEC Legal Department has less than 100 lawyers. They cannot prosecute one million offenders. We need electoral offences commission because if INEC were to do prosecution, we would never be able to do anything else.'

He allayed fears over the timeline for campaigns and electoral activities, saying that it was not a creation of INEC but provisions of the Electoral Act 2010 as amended.

He said, 'Whatever happens in Nigeria is not an exclusive internal affair but has repercussions in the sub-region and the continent.' (Punch).