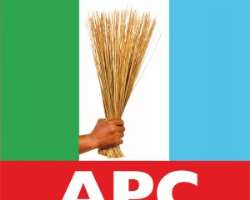 jpg
APC Logo
&
The All Progressives Congress (APC) has strongly condemned the spate of mass killings by Boko Haram in the country's North-east, calling the insurgents cowards for targeting unarmed civilians, especially women and children, in their dastardly attacks.

&
In a statement issued in Abuja on Wednesday by its Interim National Publicity Secretary, Alhaji Lai Mohammed, the party insisted that nothing in the world can justify the senseless slaying of innocent civilians by a band of marauding insurgents, and reminded the terrorists that they cannot win the ill-advised war they have levied against their fatherland.

&
&
&
It condoled with the government and people of the affected states, especially Borno which has borne the brunt of the attacks, over the killings as well as the destruction of houses and other property.

&
APC said while the Nigerian military has undoubtedly recorded some successes in its battle against the terrorists, it is time for it to rev up its strategy for preventing the kind of mass killings which the insurgents have been perpetrating in recent times, especially in the remote areas.

&
The party urged the military to increase its intelligence gathering capability with a view to nipping in the bud the attacks on civilians and military targets, including barracks.

&
'However, we make bold to say that successful intelligence gathering cannot be possible if the stakeholders are not carried along; when soldiers have not taken the pains to win the hearts and minds of the local communities and where decision making on key and pressing problems centres  around Abuja.

&
'The delay in acceding to requests from troops on the field concerning logistical challenges, due to unnecessary bottlenecks at the level of the political authorities, is exploited by Boko Haram to carry out daring and deadly attacks not just on civilians but on the military itself.

&
'Therefore, it is absolutely important to provide the brave and patriotic personnel we have sent to the battle against the insurgents with everything they need to prosecute a successful battle.

We must also ensure that we are not just fighting to win the battle, but to also win the peace,' it said.

&
Meanwhile, APC has asked the presidency to stop being unnecessarily defensive and concentrate on providing the military with all that it requires to defeat the insurgents.

&
The party described as counter-productive, unwarranted and ill-advised the not-so-subtle attacks launched against Borno State Governor Kashim Shettima by the presidency, for simply stating the obvious, that our soldiers need to be adequately equipped and properly motivated, if they are to be able to subdue Boko Haram.

&
'We know that several of the presidency's attack dogs are terribly under-employed and that they need to face the klieg lights time and again to justify the huge taxpayers fund being expended on them, but the truth is that they ridicule no one but themselves and the presidency when they have to bark at the victims of the deadly Boko Haram attacks from the comfort of their padded offices in Abuja.

&
'Gov.
Shettima is in the eye of the storm, so to say, and has wisely gone to Abuja to brief the presidency on the situation in his state after the last round of attacks.

For the same presidency to unleash perhaps its most vicious and unrelenting attack dog against the same Governor amounts to bad judgement, which also undermines the fight against the insurgents.

&
'The presidency's attack on Gov.
Shettima is also unfair and grossly insensitive to the plight of the people and government of Borno, who deserve nothing but our support and succour at this difficult time,' it said.

&
The party however commended Gov.
Shettima for his unflinching support to the military in its ongoing battle against Boko Haram, as well as the efforts of his administration to alleviate the sufferings of the victims of the terrorist attacks, urging him to continue along that path until total victory has been achieved.