As Gov. Okorocha Approves Venue For His Reception
By Vincent Ebuka 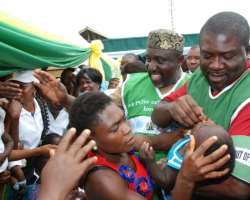 The National Union of Imo State Students (NUISS) rising from her congress has stated that while Imo Students are not against the proposed visit of president Jonathan to the State but regrets his objective of visit for which they described as political jamboree.

Speaking during a press conference organized by the said Imo Students umbrella at Candle Wood Hotel, Owerri, the students has expressed shock and mix feelings thereby lack any cogent reason to hold onto as a reason to welcoming Mr. President thereby condemning such visits.

Speaking through its President, Comrade Ereziefor C. Amarachi, the body reiterated its resolve to continue to work Governor Okorocha especially with his youth friendly policies in education.

The Student leaders posited that although Imo State produced the second largest vote in the country that delivered the president, he has never visited to commission any project of the Federal Government as non exist.

or even encouraged the free Education scheme that Governor Okorocha has probably declared free in all States of the federation.

The group stated that it is undemocratic for the president to visit a state that gave him massive support just for party reasons, adding that a leader should lead by example.

The union also described as unethical, the criticisms leveled against Governor Okorocha by the federal Minister for foreign Affairs, Prof. Viola Onwuliri in a radio program.

They frowned at the actions of Prof. Onwuliri whom they said should have shown the tenets of good leadership. they noted that the platform which she represents has recorded years of non-achievement and backwardness, and therefore said she has no right to make out those contradictory words against a leader who knows his onion.

The student leaders however applauded Governor Okorocha for his giant strides and achievements which they said have brought the dividends of democracy to all Imolites and students in particular.

Passing a vote of confidence on the Governor, they urged him to remain focused, never to be distracted by critics and promised to support him unto his presidential ambition.

The group however commended Governor Okorocha over the appointment of one of their leaders, the Imo State Youth Ambassador, Hon. Godstime Samuel, as the special adviser on student affairs, noting that his Excellency has shown that he rewards hard work and his cordial relationship with the students.

On the issue of street hawking and indecent dressing in the state, the union resolved to set up a tax force to address the matter and to liaise with the bureau of student affairs and other security agencies in order to curb the menace.

Others are: The vice President, Comr. Genevieve Diwe, the secretary, Comr. Winifred Nwadinigwe, the Minister of socials, Comr. Prince .T Okere, The minister of welfare, Comr. Lazarus Oguike and other officials.