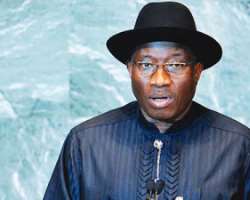 
Strategies to make the rallies being planned by the Peoples Democratic Party in zones and states hitch-free took the centre stage on Monday evening when President Goodluck Jonathan met state governors elected on the party's platform behind closed-doors.

Governor Theodore Orji of Abia State disclosed this to State House correspondents at the end of the meeting which ended around 11pm at the Presidential Villa, Abuja.

Orji said the planned rallies were meant to sensitize people and formally receive some politicians who recently defected to the party.

He said, 'The meeting was in compliance with what the President promised us that he will be meeting regularly with PDP governors. He met with us today (on Monday) and we reviewed party activities, especially the rallies that we are going to hold in the states and zonal levels.

'Declaration is not the issue now. The President will declare when he wants to, he will tell you if he wants to run or not. As of now, what he is doing is to interact with stakeholders and that is the function of the President, to meet with his people.'