NNPC must be tamed now – Punch 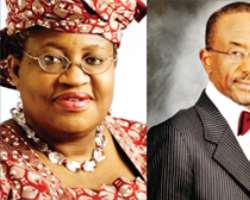 
WHO authorised the Nigerian National Petroleum Corporation to unilaterally subsidise the price of kerosene? Unable to satisfactorily answer this simple question, the corporation and its backers in government have been dishing out unconvincing justifications and rebukes to its critics. But the emerging picture is that of a state-owned agency that operates unencumbered by checks or censure and where corruption and impunity have reached unimaginable levels.

At the heart of the latest scandal is money accruable to the Federation Account that, according to the Governor of the Central Bank of Nigeria, Lamido Sanusi, ought to have been remitted by the NNPC. Revising his earlier estimates, Sanusi told the Senate Committee on Finance that NNPC had failed to account for $20 billion of the $67 billion realised from crude oil sales. Since the issue of missing funds cropped up, the NNPC, the Ministry of Petroleum Resources and, curiously, the Minister of Finance, Ngozi Okonjo-Iweala, have been at pains to debunk the claims. After meetings among them, including Sanusi and the Director of Budget, Bright Okogu, to 'reconcile the accounts,' CBN now agrees that $47 billion has been accounted for. While Sanusi had initially insisted that $12 billion was still unaccounted for, Okonjo-Iweala and NNPC only agreed that $10.8 billion (N1.68 trillion at N156 to US$1) was yet to be 'reconciled.' Later, the NNPC claimed it had 'legitimately' spent about 80 per cent or $8.76 billion (N1.366 trillion) on kerosene subsidy, partly on petrol subsidy and the rest on repairs to damaged pipelines.

This nonsense has gone too far. Whether it is $20 billion (N3.12 trillion) or $10.8 billion (as admitted by the rogue corporation, the NNPC has no right under the 1999 Constitution to withhold or spend money accruable to the Federation Account without prior appropriation by the National Assembly. The blame for NNPC's lawlessness rests partly with a parliament that despite its own findings of its massive corruption and illegalities, has failed to use its constitutional powers to rein in the company or amend the laws under which it hides to plunder the nation's resources, and align them with the constitution.

Sanusi has pointed out what the House of Representatives Ad hoc Committee on fuel subsidy fraud discovered in 2012; that by two memos, dated June 9, 2009 and October 19, 2009, the then President Umaru Yar'Adua had stopped the subsidy on kerosene as had been done earlier with diesel. 'On what basis then did NNPC pay itself billions of dollars as 'subsidy' for kerosene in view of the directive?' Sanusi asked. The House had noted in 2012 that not only did NNPC defy the presidential directive, but that the subsidy scheme was 'a scam to defraud Nigerians and extort money.' But the National Assembly failed to act while the Petroleum Minister, Diezani Alison-Madueke, and the NNPC launched their dubious and ineffective, Kero-Direct scheme in furtherance of the blatant illegality.

The NNPC punishes Nigerians, first, by illegally withholding oil proceeds in the name of subsidising kerosene and, again, by ensuring that the product is not available at the advertised price of N50 per litre, as people pay between N120 and N140 per litre. The NNPC should produce the authorisation for its unilateral and fraudulent kerosene subsidy scheme. The provocative assertion by Alison-Madueke that the presidential directive is worthless should not be allowed to pass uncensored.  The National Assembly should accept nothing less than accountability. Under the authorised petrol subsidy programme, subsidy claims pass through and are verified by the Petroleum Products Pricing and Regulatory Agency for payment.

No agency of the government has the right to unilaterally appropriate to itself revenue meant for the Federation Account. The National Assembly should quickly repeal the laws to deprive the NNPC of any legal loophole it is exploiting to plunder the treasury. The parliament has serially failed Nigerians. The sums, N1.68 trillion, N1.366 trillion and N3.12 trillion each constitute significant percentages of the total national budget. Add the NNPC's claim of N1.366 trillion purportedly for kerosene subsidy to the N971.13 billion already earmarked for petrol subsidy in 2013, you have N2.337 trillion taken for a controversial subsidy. Which other parliament in the world will tolerate the magnitude of extra budgetary spending as the NNPC unilaterally does?

Since the vast majority of Nigerians do not benefit in any way from it, the National Assembly should immediately stop further subsidy on kerosene. The NNPC's accounting system is designed for fraud and should be overhauled. A properly run firm does not need weeks and endless committees to explain its financial operations; they should be available and easily understood by all relevant bodies. Most especially, those found to be culpable in this fraud should be brought to justice.

The NNPC has carried on as a state-within-a-state only because of the complicity of successive administrations that have, according to one critic, turned it into a 'Presidential ATM' from which they raise money for everything from pocket money to funding elections. That is why they have, in succession, failed to restructure the corporation.

Given his track record, it is not likely that President Goodluck Jonathan, who has typically been unconcerned about the unfolding scandal, will act. The National Assembly can, however, still redeem itself by stopping this travesty and safeguarding revenues that belong to the three tiers of government from the NNPC marauders and their political backers.