As Senator Abe Moved The National Assembly And Rivers State Exco To Ogoni, APC Declares Wike A Traitor And Archenemy Of Rivers State 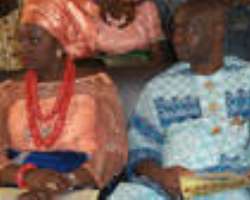 The Supervising Minister for Education, Barrister Nyesom Wike, has been declared a traitor and an archenemy of Rivers State by the State Chapter of the All Progressives Congress (APC).

According to the State Interim Chairman of APC, Dr. Davies Ibiamu Ikanya, “Wike is a bad example of how to be a politician. He is a man without principle, a man who feels no compunction about biting the finger that feeds him. He is a traitor who has by his words and actions made himself the enemy of those in Rivers State who made him whom he is politically and sent him to Abuja to represent them, only for him to turn coat.”

Ikanya in a statement issued this afternoon in Port Harcourt lambasted Wike “for repaying the good done to him by the State Governor, Rt. Hon. Chibuike Rotimi Amaechi, with evil.” The State APC Interim Chairman however appealed to Governor Amaechi not to be demoralised by Wike's betrayal after the Governor influenced his becoming a second term Chairman of Obio/Akpor Local Government Area of Rivers State when the people of Obio/Akpor vowed to deny him a second term over his disrespect for elders, arrogance and poor performance. Ikanya recalled that Amaechi thereafter in 2011 went against the prophecy of the popular cleric Apostle Johnson Suleiman that he would be making the greatest mistake of his life if he recommended Wike as a Minister of the Federal Republic of Nigeria.

“It would be recalled that when Governor Amaechi confronted Chief Wike with Apostle Suleiman's prophecy he swore with his children that he would not betray the governor. The State Commissioner for Commerce and Industry and Leader of Non-Indigenes Political Forum, Barr. Chuma Chinye, who witnessed that encounter, is still alive and can testify to it. However, like the unprincipled man that he is, Wike soon got carried away with his new status in Abuja and turned against both Governor Amaechi and the good people of Rivers State, whose interest he is supposed to be protecting. He is now an archenemy of the state preoccupied with making life difficult for Amaechi and for Rivers people and is happy to be recognised as the arrowhead of the opposition to Amaechi, causing much harm to the economy and security of Rivers State,” Ikanya said. He, however, expressed happiness that “for every Wike, there are the likes of Senator Magnus Abe, Hon. Dakuku Peterside and several other political heavyweights who have remained loyal to Gov. Amaechi and to improving the lot of the good people of Rivers State.”

The Rivers APC Interim Chairman congratulated Senator Abe on the successful Thanksgiving Service held for him yesterday in his hometown church (Church of Nigeria, Anglican Communion situated at Bera in Ogoni in Rivers State) to express thanks to God Almighty for sparing his life after he was shot by the police on 12thJanuary, 2014 during the aborted rally organised by the Save Rivers Movement in Obio/Akpor. Senator Abe, the Senator representing Rivers South East zone and Chairman of the Senate Committee on Petroleum (Downstream), had to be flown to London for further medical treatment. He returned to Nigeria a week ago. The Thanksgiving Service saw a mammoth crowd of both locals and visitors from other parts of Nigeria and abroad turning up to rejoice with Senator Abe.

The event described by Chief Igwe Uche a popular Media Chief based in London as an epochal and historical further stated that Senator Magnus Abe has by this event moved the National Assembly and Rivers State Executive Council to Ogoni. True to the assertion by Chief Igwe, the event shut down all activities in the Ogoni Kingdom of Rivers State and witnessed the shifting of both the National Assembly and Rivers State Executive Council to Ogon Kingdomi. Rt. Hon. Chibuike Rotimi Amaechi the Governor of Rivers State with his Deputy, Engr Tele Ikuru led the entire State Executive Council including the First Lady of Rivers State, Dame Judith Amaechi, SSG, Mr. George Feyi while Distinguished Senators Wilson Ake, Domingo Obanale and Numidim led the Upper Chamber with Hon. Chief Dakuku Peterside, Chairman of the House of Representatives Committee on Petroleum (Downstream), Hon Osita O. Asita, Hon. Dr. George Dawari, Hon Ogbonna Nwuke, Hon. Moris Poromer led the lower Chamber of the National Assembly.

The Academia was not spared as Prof Barineme Fakae the Vice Chancellor of Rivers State University of Science and Technology was at hand to lead Prof. Samuel Nnieedu, Prof Walter Ollor, Prof Nelson Brainbaza, Prof Mrs Tayo Ebong and others to the historical Thanksgiving service. Chief Dr. Yemi Ogunbiye and Chief Uche Igwe led his friends from Europe.

Mentioning the clergy, the politicians and captain of Industries in attendance will be like mentioning who is who in Rivers State.

Dr. Ikanya summed up the event by describing the event as an eye opener on the level of acceptance of Senator Abe by his people and of APC by the people of Ogoni land and the entire Rivers State. He said that from the turnout at the Thanksgiving Service, “Chief Wike's gubernatorial ambition is nailed to the ground, thereby saving Rivers State from a potentially disastrous administration that would be the worse ever since the creation of Rivers State and take us back to woods.”