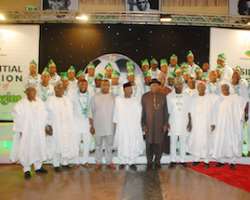 
The Bronze-winning Super Eagles at the just-concluded African Nations Championship (CHAN) in South Africa were rewarded yesterday by President Goodluck Jonathan with a cash gift of N31million.

Jonathan who hosted the team to a dinner at the Presidential Villa in Abuja said he was particularly happy with the team's performance against Morocco.

The Nigerian team had finished third at the 16-team competition, after beating Zimbabwe in the third-place match.

But the highlight of its performance was when it came from three goals down against the Atlas Lions to win 4-3 after extra time in their quarter-final match.

The President expressed the hope that some of the players would in no distant time land lucrative contracts with international clubs because of their performance at the championship.

He noted that Nigeria's performance in sports had improved in recent times, saying this was because of the synergy between the executive and legislative arms of government.

'I think we are succeeding in sports because there is a strong link between the executive and the parliament. The current Director-General of the National Sports Commission (NSC) has been a very vibrant parliamentarian.

'You can now see the synergy, and that when the executive and the parliament are working together this country can reach great heights,' Jonathan said.

He described the third-place finish by the team as 'a golden bronze'', noting that the country was reaping the benefit of its investment in sports.

Aminu Maigari, Chairman of the Nigeria Football Association (NFA), said he was elated to be at the Villa to present another successful team to the President.

He assured that 2014 would see more of such activities, with the international competitions lined up for the country's national teams.

Sports Minister Bolaji Abdullahi who handed over the team to the President said Jonathan's encouragement had been the 'live wire'' of the achievements in sports.

'His Excellency told me at the Federal Executive Council (FEC) meeting that these boys must be celebrated. That we cannot give the impression that we celebrate our sportsmen and women only when they win gold.

'We should also celebrate their efforts. This is to say that even though we have won bronze, this is a golden bronze,' Abdullahi said.

Each member of the 23-man squad got N1million, while the team's head coach, Stephen Keshi, got N1.5million.

The three assistant coaches got N1million each, while the seven backroom staff received N500, 000 each.