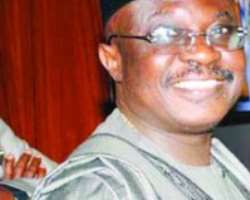 No fewer than five candidates are being considered by the Presidency for Chief of Staff to the President, it was learnt yesterday.

Chief Mike Oghiadomhe was forced out of the office by President Goodluck Jonathan on Monday.

The candidates are the Minister of the Federal Capital Territory (FCT), Senator Bala Mohammed; a former Head of the Civil Service of the Federation, Mr. Steve Oronsaye; DAAR Communications proprietor Chief Raymond Dokpesi; ex-Governor Donald Duke and the Principal Secretary to the President, Alhaji Hassan Tukur.

The President is said to be assessing some recommended candidates.

But while the President is yet to make up his mind, there has been celebration by workers at the Presidential Villa over Oghiado-mhe's exit.

Some people also took to the streets in his hometown, Fugar in Edo State, celebrating Oghiadomhe's removal.

He has failed to use the position to help the people and the town, they alleged.

The jubilant Fugar citizens recalled with nostalgia the 'development' brought to the town by the late Admiral Mike Akhigbe, another indigene who was Chief of General Staff in the Gen. Abdulsalami Abubakar regime.

It was learnt that Oghiadomhe remained indoors yesterday at his residence on Aso Drive in Maitama District, Abuja to receive visitors, including some Presidency officials.

According to a source, the criteria for the new Chief of Staff will be competence, rich experience in bureaucracy, maturity, exposure, loyalty, tolerance of all, irrespective of leanings, being a team player and being apolitical'.

Responding to a question, the source added: 'The personalities of these candidates are being analysed. For instance, there are concerns that the FCT Minister may be unstable on the job following pressure on him to vie for the governorship of Bauchi State in 2015.

It was also unclear last night if Dokpesi would be willing to leave his media empire for such an assignment. There is the likelihood of a partisan backlash on his media house. But having being a Chief of Staff to ex-PDP National Chairman Bamanga Tukur when he was the governor of the old Gongola State, 'Dokpesi will be on a familiar terrain if he gets the job'.

But President Jonathan's 'godfather' Chief Edwin Clark has kicked against Dokpesi's consideration for the job.

Accusing him of so many things, he vowed to abort any plan to pick the media mogul.

Except for his closeness to ex-President Obasanjo, the former Head of the Civil Service of the Federation, Mr. Steve Oronsaye, appears to have fitted the bill having worked as a Permanent Secretary at the Villa for more than eight years, the source said.

'Oronsaye's recent interaction with the EFCC might have been a pre-emptive move by some powers that be who knew the thinking of the President,' he added.

'Duke's polished nature, age and innovative acumen seem to be assets for the job, but there are doubts if he can be apolitical'.

Duke has been out of power for six years, since leaving office as governor of Cross River State.

'Being a Principal Secretary to the President, Tukur is familiar with the schedule of his boss. His Achilles Heel is his inability to detach himself from politics, especially in Adamawa State, where he wants to call the shot as a local hero.

'He is also said not to have the temperament to tolerate perceived political enemies of the President. He is so loyal to the President to a fault that he takes on battles against the President's imaginary or known enemies.

Another source said the criteria had been set out by a team of experts which the Presidency engaged in 2011 to evaluate the Office of the Chief of Staff.

The source added: 'The President is seeking a United States model in managing the Office of the Chief of Staff. The next occupant will be heard less as the case with Gen. Mohammed Abdullahi, who was the Chief of Staff to ex-President Olusegun Obasanjo.

'I think we lost the track since Gen. Abdullahi left office in 2007. The former Chief of Staff conducted his activities in such a professional manner that he earned the confidence of his principal, governors across party lines and even the Organised Private Sector. He was also not involved in politics.'