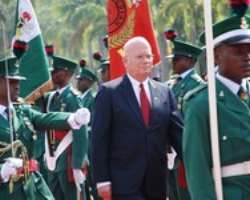 
The United States Ambassador to Nigeria, Mr James Entwistle, on Tuesday said there was no official of his country that said Nigeria would break up in 2015.

Entwistle made this known in Sokoto during a media roundtable.

According to him, no official of the U.S. has ever said that. Nobody has said that Nigeria will break up in 2015.

“What I see is a country that will steadily match forward with the U.S. by her side,'' he said.

The envoy said that the U.S. had no intention to cut its health programmes or other funding to Nigeria due to the recent signing of the anti same sex marriage law.

He said that the U.S. government would not sanction Nigeria in this direction, adding: “I was hitherto misquoted”.

Entwistle said that all Nigerians must be free to move without any restrictions or fear of violence.

'But what legally constitutes same sex marriage in Nigeria is not our concern,” he said.

On 2015 general elections, Entwistle said that the U.S. wanted transparent, credible, and non violence elections which the Nigerian people deserve.

“We should begin now to commit ourselves to non violence before, during, and after the 2015 polls.

The envoy said that the forthcoming elections should be something that Nigerian people should embrace with enthusiasm and not with fears.

'The right to vote is very precious and it always bothers me when people don’t vote,” he said.

On HIV and AIDs, the U.S. ambassador said that his country had committed about 3.6 billion dollars to fight the disease in the last 10 years in Nigeria.