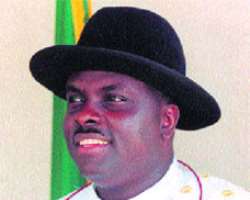 Nigeria's 10 most influential governors
By Olusola Balogun
Sunday, March 14, 2010
Ibori
Nigeria's democracy is already over ten years old with several serving and former state governors established as key players whose voice carries a lot of weight in the country.

Sunday Sun in its usual style showcases the iconic figures and why they stand out.

James Ibori was a two-term governor of Delta state. He is a man that can be said to be a cat with nine lives as he survived several political landmines while in office.

Ibori, it was, that led other governors in 2003 to reject Obasanjo for second term at the party's presidential convention. It was reported that he was at the frontline of the governors who wanted Obasanjo's deputy, Atiku Abubakar, to take over from the Ota farmer. Atiku eventually ducked leaving his supporters in the lurch.

When Obasanjo decided to be vindictive, two of Ibori's co-travelers in the ill-fated adventure, DSP Alamieyeseigha and Joshua Dariye, were mowed down. But Ibori was able to

•Shekara's
wriggle his way back into reckoning as he was also in the inner kitchen of those that picked the successor to Obasanjo.

He also, reportedly, bankrolled the election of the President to emerge one of the powers behind the throne in the country.

Ibrahim Shekara'u is the incumbent governor of Kano state. The former school principal joined the gubernatorial race after the former governor Musa Rabiu Kwankwaso refused to pay Shekara'u's severance package. Kwankwaso was reported as telling him to go and contest as governor if he wanted to collect his entitlement.

Enraged, Shekara'u decided to join the All Nigeria Peoples Party (ANPP) and contest against Kwankwaso in the 2003 election. He handed the PDP a crushing defeat and again repeated the feat in 2007 even when the ruling party was determined to reclaim the state from the ANPP.

•Saraki
Reports also claimed that he perpetually ensured that the state chapter of the PDP is in perpetual turmoil.

Besides the fact that Shekara'u is reported to have performed above average in the state, he is also regarded highly among his colleagues in ANPP.

Shekara'u, who recently drew plaudits from several Nigerians over his firm stance against temptation to dump the ANPP, is also believed to be planning to challenge the PDP's grip on the Presidency in 2011 by running for the exalted position.

•Tinubu
'Bukky', as his supporters fondly call him, came into the political equation of the state as a result of the frequent face off between elder Saraki and those he installed as governors. It is on record that the elder Saraki fell out with former governors Sha'aba Lafiagi and Mohammed Lawal. He felt that those governors would not pay him back in bad coin if they were his biological sons, hence the choice of 'Bukky' as governor.

However, since 'Bukky' assumed office, he had brought a lot of glamour to the office. His influence transcends the landlocked state that he was made the chairman of the governors' forum and has held on to that office for the third year running now.

Under Bukola Saraki, the governors' forum, which hitherto was more of a toothless bulldog, had been transformed into a potent power broker that dictates the direction of the nation's politics. Today, Bukola's opinion is seen more as the opinion of the 36 Nigerian governors and perceptive national leaders often take it very seriously.

Bola Ahmed Tinubu was a two-term governor of Lagos state. Tinubu is one politician whose name inflicts awe in the heart of his opponents.

•Kalu
Although the bespectacled politician is of the opposition, his traducers in the ruling party would give anything to have him on their side. The reason is simple. Tinubu's political savvy is legendary and his understanding of the nation's politics is bewitching.

The former Senator holds the record of being one of the few that looked former President Olusegun Obasanjo eyeball to eyeball even at the zenith of his perceived excesses in power. Tinubu, for instance, defied Obasanjo over the issue of 54 local governments and was able to pilot Lagos effortlessly despite the financial strangulation that the PDP government at the centre visited on the state.

He again filed out with those out to gun down Obasanjo's third term agenda when many politicians saw such idea as suicidal.

The manner he bestrode Lagos politics like a colossus still baffles many of his contemporaries who believe they are better politicians than him. Tinubu's biggest weapon is his penetrating influence that made it almost impossible for anything to escape his attention in the country.

•Oyinlola
Orji Uzor Kalu was a two-term governor of Abia state. Like Tinubu, he is also very daring and visionary. Kalu is not one that would be scared off the truth. He combines his many attributes with ability to rally support at the grassroots.

Kalu while in office called Obasanjo's bluff even as a PDP member when such action was seen as a taboo. 'OUK' as he is fondly called by his admirers, led other like minds to form the Progressive People Alliance (PPA) when he could not stomach lack of internal democracy in the PDP. The young PPA shoved aside all opposition in Abia to win the state for a gubernatorial candidate that was still in EFCC detention as at the time of the election. He did not stop in Abia alone, he extended his influence to Imo state where he enthroned Ikedi Ohakim as state governor.

Olagunsoye Oyinlola is the sitting governor of Osun State. Oyinlola is fast assuming the status of Mr fix the seemingly impossible in Nigeria's politics. Against all odds, he arranged the rapprochement between former President Olusegun Obasanjo and his estranged deputy, Atiku Abubakar. Although the Atiku Obasanjo parley could not achieve the desired goal of bringing Atiku back to the PDP, that the Osun governor was able to pull the meeting was highly commendable.

•Aliyu
Before then, the former military administrator of Lagos had arranged the reconciliation between general Ibrahim Babangida and retired colonel Tony Nyiam.

Nyiam was one of those military men that unsuccessfully attempted to oust IBB during a coup attempt in which his ADC, U.K Bello was killed.

Oyinlola, an Okuku prince, is known for his humility and the shrewd manner he goes about things. It was this uncommon characteristic that was responsible for the return of former Deputy National chairman of the PDP, Shuaib Oyedokun, to the party after he had decamped to the AC.

Babangida Aliyu is the sitting governor of Niger state. The former Permanent Secretary in the Presidency is another governor whose opinion carries a lot of weight among his colleagues. Babangida who is not known to mince words when it comes to the truth, stood out amidst the PDP governors who insisted that Vice President Goodluck Jonathan be proclaimed acting President following the long absence of President Umaru Yar'Adua.

Those close to the governors' forum claimed he is always the modulator as he always deploys his experience as a civil servant to bear on issues of national importance.

•Amaechi
Rotimi Chibuike Amaechi is the incumbent governor of Rivers state. Amaechi holds the record of the only governor who did not go through the rigours of electioneering campaign before becoming governor. The manner he emerged as the governor of the oil rich state has every touch of miracle. The powers that be in the party had preferred Celestine Omehia who they all supported but Amaechi, a lawyer, proceeded to the court and got the Supreme Court to overrule PDP as the former speaker of the state House of assembly was proclaimed the real winner of the party's primaries and should therefore be crowned the winner of the election.

Lucky Igbinedion ruled Edo state as governor for two terms. Although he is lightly regarded in the state, it is on record that he masterminded the emergence of the incumbent governor, Adams Oshiomhole, as well as answer several members of the PDP that saw him as a failure while he was in office.

•Igbinedion
Peter Odili is a former governor of Oil rich River state. He ruled the state from 1999 till 2003 after completing the mandatory two-terms of four years. Odili while in office was a delight for his panache and mature way of handling issues. Out of office, he has also managed to stay off public glare to the extent that he succeeded in securing a permanent injunctive order against the EFCC from investigating or prosecuting him. How he was able to pull that stunt still remains a mirage but the fact is that three years after his immunity as a governor, Odili still walks around not bothered by any graft investigation.

Strangely, the anti-graft body has not been able to carry out the order.