WHY RAMSEY, RITA DOMINIC PULLED OUT OF GUS 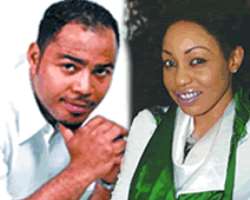 As ShowBizNow exclusively reported that contestants threatened to pull out of GUS celebrity edition because Genevieve emerged the host, three of the original contestants billed for the show eventually pulled out.

Star actor, Ramsey Nouah, Rita Dominic and ex-beauty queen, Omowunmi pulled out. A source said one of the contestants pulled out on medical grounds as her doctor did not certify her fit for participation.

'The doctor was not privy to the activities they would be doing as the contestants were not told. If they had asked for medical report before the contract was signed we would have known what to do. She pulled out because her doctor did not certify her fit'. However, people on the side of NBL, Bate and Cosse, the company in charge of the event insist that some of the contestants started raising questions immediately they got wind of the fact that Genevieve would be the host of the reality TV show.

Ramsey was said to have pulled out of the show as he got wind of the fact that Genny was hosting it due to the fact that he and Genny do not enjoy the best of relationship. Ramsey who was once very close to Genny fell apart with her when he called the actress and told her that colleagues in the industry said she is too proud. He consequently advised her to stop giving diva-attitude to fellow actresses as it won't help her career. We learnt that one thing led to another, the two argued, exchanged hot words on phone and consequently fell apart. However, a source insisted there is more to the feud. The source said it was a romantic affair gone sour that actually caused the fight and that the exchange of words on phone was as a result of a feud they both had before Ramsey placed a call to her using the industry complaint against her as excuse.

From that time on Ramsey and Genevieve have not been on talking terms, and Ramsey is not hiding it.

But Ope Banwo, the CEO of the company that manages Genevieve said Rita and the rest that pulled out should be sued for breach of contract if they pulled out because Genevieve was chosen as host. If it is true they signed a contract to appear at a show, I don't think it will be right for them to pull out simply because they don't like the hostess. And I think that's part of the problem we seem to have in this country where artistes don't seem to respect contracts. If you are a professional and you signed a contract then you honor it .

It doesn't matter who they bring. It will be different if when you negotiated the contract you reserved the right to have a say on who the hostess is going to be. That did not happen because I know that was not in the contract, I have some starson the show. I think this is wrong except of course there are other reasons why she withdrew. If the third party did not breach their side of the contract which to the best of my knowledge didn't happen , then it would have been wrong for any professional not just Rita now, to pull-out because from what we are hearing they do not like the person that was chosen as hostess for them. But of course we do not know the full story, so I cannot speak for her or the other side. If she pulled out because of the hostess, then it will be wrong .

It is unprofessional and I think it's the problem in the industry where people sign contracts and they just feel they can walk away from it because they don't like something. Once you have signed you are stuck. That's the way it works in the US and that is what they do in any other country. They will be sued for that, you don't sign a contract and walk away because you don't like something. You should think of all of that before you sign and once you have signed you are bound, even if you don't like some of the issues that came up after. We are not babies here , we are professionals and when you sign a contract you need to honor your contract. I think somebody should start holding stars accountable for their contracts.

That is why the industry is not developing, that is why foreigners are afraid of signing Nigerian artistes-on because they don't know what they are going to get. So I am very passionate about this, a contract is a contract. But when we sign contracts we should honour them and those who do not should be made to face the law. What I'm saying here is that if a professional signs a contract and without the consent of the other party, he walks away from it, an example should be made of him and this is what I'm advising the organizers to do. When you make an example of one, they will learn to honour contracts. There is too much of it in Nollywood and I think they should be sued by the organizers. I will like to be quoted on that. I think they should be sued by the organizers because it costs them money and they have to do a last minute run around to get them replaced. They didn't get the kind of people they thought they would get.

When we explained that some pulled out on medical grounds, Ope dismissed the talk as cheap. 'Well you can read between the lines yourself, at least my artistes that were there all went through the medical test and I was even there when they evaluated two of my artistes. It was nothing invasive. They just checked their blood pressure to ensure they were fit to go into that kind of event. So you cannot pull out when they have not told you you're not medically fit. After all they said they were going to get them insurance and do you know an insurance company that will insure people without testing them?

The contract says they will be given a comprehensive insurance policy for the duration of the event, so if the insurance company now says they want to do testing to be able to insure them I think as a professional you should not have a problem with that, and nobody else had that problem except those people. It will be different if after they tested them and they said they were not fit. Then, that is a ground under which they can pull out; but that is not what happened here, they were never tested from what I know', he said.

Mildred Okwo, Rita Dominic's Manager also had some comments on the issue:

Sam, I don't understand the need for people to grandstand when there is absolutely no reason to. Our country has become a place where people cheaply market themselves on the pages of a newspaper as opposed to gathering facts and advancing proper solutions for real problems based on those facts.

Rita Dominic did pull out of Celebrity GUS but not before we explained the reasons to those with whom she had a contract . We took out time to explain to the head of the brand and the COO of Bate Cosse why she had to pull out. She pulled out for unavoidable reasons. To the best of my knowledge, they accepted my explanation and aside from those two gentlemen, every other person is speculating for their own ulterior motives and we will not dignify them with a response. It is unprofessional for any person to make sweeping statements when they are not privy to both sides of the story.

A close source to the Chief Operating Officer of Bate Cosse, the agency that handled the reality show, told us that one of the contestants pulled out of the show on medical grounds, but denied that Ramsey, Rita or Omowunmi pulled out because of Genevieve. 'We spoke to over 20 celebrities, and some said yes, some said no. Some people who indicated interest earlier later pulled out because of the scope of the programme. That can't be said to mean pulling out' the source disclosed.

One way or the other, GUS Celebrity edition is generating so much interest that the viewers cannot wait to start watching by end of March or early next month.