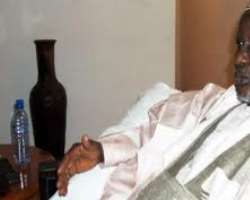 
It is too late in the day for any right-thinking northern leader to oppose President Goodluck Jonathan's Presidency, Alhaji Tanko Yakassai, the leader of the Northern Elders Council, NEC, has said. Yakassai, whose NEC was flagged off on Thursday, spoke with  Sunday Vanguard.

He said that politicians against Jonathan were mere noisemakers, who ran away when there was the need to fight for northern presidency.

The elder statesman stated that it was unfortunate that those who did not join him to fight for the actualisation of northern presidency following the death of President Umaru Musa Yar'Adua were the ones claiming to be fighting for the North. 'I would say these people are mere noisemakers because they ran away when the opportunity presented itself for them to work for the retention of the presidency when the former president died.

'But they simply ran away leaving me alone. If they had joined me in the fight, we would have succeeded', he said. 'Go and check the records; I am the one who wrote to the Senate President, David Mark, to condemn the 'invention' of the Doctrine of Necessity, which has no place in the Nigerian Constitution, but not many of those who are making noise today assisted me in any way.

'I challenge them to come and explain where they were when I started the campaign for a northern president. Where were they when I started the fight? The noisemakers do not wish Nigeria well.' Yakassai explained that NEC was in full support of the forthcoming National Conference because he believed in the indivisibility of Nigeria, having worked over the years for the unity and progress of the country.

He suggested that anyone who had any idea on how to make Nigeria better should come forward and present same during the conference rather than continue to fan the embers of hatred and division. Yakassai denied the insinuation that his group was being backed by government to scuttle the North's desire for the presidency, saying he was merely keen on promoting the unity and progress of Nigeria.

The inauguration of NEC in Kaduna, on Thursday, had come under attacks by some northern politicians, who described it as a group made up of politicians who did not enjoy the mandate of the people but working for themselves. Dr. Junaid Mohammed, second republic politician, even described the NEC as composed of political prostitutes out to do the bidding of the Presidency.