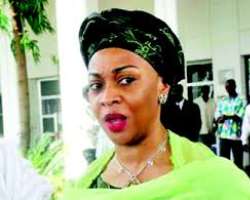 
Just a few days after the former Governor of Kwara State and scion of Saraki dynasty in Kwara State, Bukola Saraki,  defected from the Peoples Democratic Party to All Progressives Congress, another of the Sarakis has moved the opposite direction.

Sen. Gbemisola Saraki, sister to Bukola,   with some chieftains of All Progressives Congress in Kwara and their supporters joined PDP on Saturday.

Among those that defected with her to PDP are Mr Lola Ashiru, an APC chieftain in Offa, Kwara, Prince Sunday Fagbemi, also of APC and Alhaji Abdulrahman Abdulrazaq, the governorship candidate of the CPC in the 2011 elections.

Gbemisola Saraki, while addressing her supporters in Ilorin, the state capital, urged them to join hands with the PDP 'to rescue the state from the shackle of oppression.'

She said that her concern was about the plight of youths in the state, adding that the majority of them were jobless.

'The situation is so bad that many people have abandoned the trades they spent several years to learn,' she said.

She, however, expressed optimism that if voted into power, PDP would return Kwara to the path of excellence in the management of human and natural resources.

She urged the people of Kwara to support President Goodluck Jonathan, saying she was happy that majority of the people remained in PDP