Herrera calling up Ochoa for March 5 match with Nigeria 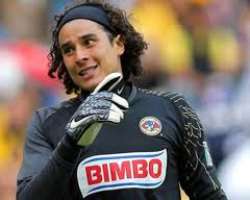 The former America goaltender will have a chance to prove himself to the Mexico coach before the world cup.

Guillermo Ochoa will get his chance to impress Mexico coach Miguel Herrera on March 5 when El Tri face Nigeria in Atlanta, Georgia.

The former America manager told Record on Thursday after meeting up with the Ajaccio goalkeeper in Corsica that he would be called into the squad for the only FIFA date ahead of Brazil 2014.

Herrera added that the meeting - part of his tour of Mexico's Europe-based players - went well and that the 28-year-old is ready to fight for a starting spot.

'Like I've told all of them, I'm not guaranteeing a starting spot to anyone, just the opportunity to come and compete and win over the coach,' Herrera told MedioTiempo in a separate interview.

Herrera explained to Fox Sports Radio that Ochoa is one of five goalkeepers he is contemplating for the World Cup.

The Mexico coach will be moving on to visit Andres Guardado next at his new club Bayer Leverkusen in Germany and added that he'll also be seeing Javier Hernandez, Hector Herrera and Diego Reyes before returning to Mexico.