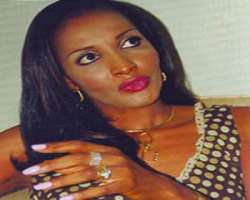 
The Maxi Okwu-led faction of the All Progressives Grand Alliance, APGA, has appointed the wife of the late Chukwuemeka Ojukwu, Bianca Ojukwu as the new leader of the party.

This is in line with an earlier resolution taken on March 22, 2013.

The adoption of Mrs. Ojukwu, currently Nigeria's Ambassador to Spain, took place at the National Executive Committee, NEC, of the party in Abuja.

Another faction of the All Progressives Grand Alliance, led by Victor Umeh, had in January appointed the Anambra State Governor, Peter Obi, as its National Leader and Chairman, Board of Trustees (BOT).

Umeh, stated that the choice of Obi was due to his contributions towards keeping the party alive in the past 11 years, and for particularly ensuring that an APGA member succeeds him on March 17, 2014 when his tenure ends.

Mr. Ojukwu was the Chairman, Board of Trustees, BoT, of the party before his demise in 2012.

The Okwu-led National Working Committee, NWC, was pronounced the authentic leadership of APGA by a Federal High Court sitting in Abuja, presided over by Justice Abdulkadir Abdul-Kafarati.

The Victor Umeh-led NWC is, however, challenging the judgement.

According to a communiquÃ© read to journalists by its acting National Publicity Secretary, Stanley Chira, APGA said it re-affirmed an earlier decision of February 16 and March 22, 2013, while it was marking the one year anniversary of Mr. Ojukwu's death, to appoint Bianca into the position.

'He remains our symbol and leader, the fact of his transit to glory notwithstanding. His wife and next of kin, Iyom Bianca Odumegwu-Ojukwu is hereby adopted as the living embodiment of his ideal. She shall in his stead be acknowledged as leader,' the party said.

The faction commended Mr. Abdul-Kafarati on his 'incisive and brilliant' judgement delivered in its favour on January 15. It stated that it would use the judgement to now recover its soul, re-focus and re-brand.

On the timetable for the 2015 general elections recently released by the Independent National Electoral Commission, INEC, the party said the Commission ought to have adopted its old order of consulting political parties before taking a decision on the matter.

The communiquÃ© said, 'NEC notes the time table for the 2015 general election released by the Independent National Electoral Commission. We concede that INEC is constitutionally empowered to issue time table and schedule of activities for general election. However, the party urges INEC to maintain the old practice of consulting political parties before taking a decision.'

The APGA faction also inaugurated its BoT, with initial members of 24 members who would be meeting in two weeks in line with provisions of Article 10 and Article 11 Sub [10][3] of APGA Constitution to elect their Chairman and Secretary.

It also resolved to constitute its National Caucus in accordance with the provisions   of Article 10 Sub [11] and Article 11 Sub [11] of APGA Constitution.

In apparent reference to the faction led by Mr. Umeh, the Okwu-faction said, 'The era of one man being Chairman/Treasurer/Publicity Secretary/Administrative Officer and Electoral Agent at Federal, state and LGA elections is over.'

It, therefore, mandated its National Chairman, Mr. Okwu, to immediately set in motion, the process for the establishment of the administrative organisation of the party in tandem with Article 14 of the party's constitution.


A Federal High Court sitting in Abuja had sacked the National Executive of the APGA led by Mr Victor Umeh as National Chairman and Sani Shinkafi as National Secretary.

The court declared that Messrs Victor Umeh and Sani Shinkafi cannot continue to hold office as National Chairman and National Secretary in violation of the constitution of the party, which stipulates a maximum tenure of eight years.

The court also ruled that the valid national officers of the party were those led by Mr Maxi Okwu.

Lawyer to Messrs Umeh and Shinkafi, Mr Patrick Ikwueto, has filed a notice of appeal, challenging the verdict of the court on the grounds that the court lacked jurisdiction to entertain the suit.