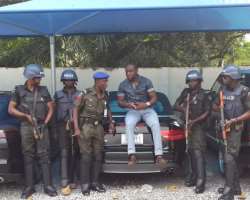 IGP Mohammed Abubakar has been a policeman all his life.

The Nigerian Police Force is ill equipped and its officers are not motivated due to the peanut they earn as their take home pay.

Millions of Naira budgeted for the force are embezzled by the top hierarchy, as seen in the several corruption cases former IGPs are involved in.

Not less than three past inspetor general of police are under prosecution for corruption, or have been found guilty of embezzlement and misappropriation.

His son Jamil, is a Kingston University-trained Computing Information Systems and Multimedia graduate and is currently a pilot with Elite Airwings. See his fast cars, wristwatch collection and