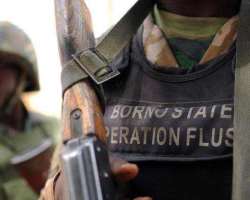 
Gunmen on Friday night attacked the EYN Church at Sabo Gari Gemadai Ward in Gulak, the local government headquarters killing the past and 10 worshippers..

The Chairman of the local government, Mr. Ularamu Maina, has confirmed the attack.

The chairman recounted that  attackers came  in their large number, at about 8.30 pm at a time the worshippers were holding a night vigil.

'On entering the church, the attackers started shooting sporadically killing many people, including the pastor', Maina stated.

'The attack left the town in confusion as people ran helter skelter even as the attackers continued to unleash terror and wanton killings'.

The attack came hours after the Speaker of the Adamawa State House of Assembly, Ahmadu Fintiri, visited Chakawa village, venue of last Sunday attack, where he sympathized with the people and donated relief materials.

The Speaker, while fielding questions from newsmen, called on the Federal Government to deploy more troops to the area to enable them cover all the nooks and crannies in the mountainous terrain.

He observed that the state of emergency presently operating in the state only covers the highways, leaving rural dwellers at the mercy of attackers.

Fintiri warned that unless urgent measures are adopted by the authorities, the people of Madagali local government, which shares common border with Borno State, might migrate enmasse.