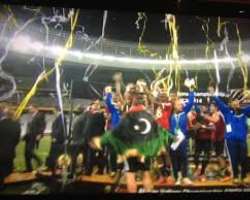 
Libya have won their first international football title by beating favourite and West African power Ghana on penalties in the final of the African Nations Championship in South Africa.

Excellent goalkeeping by the Mediterranean Knights’ Muhammad Nashnoush and a poorly aimed attempt that went wide from Ghana’s Joshua Tijane clinched the victory following a lacklustre game on Saturday.

The victory prompted celebrations on the streets of Tripoli and other Libyan cities. The players were also greeted warmly by supporters upon their arrival at the team’s hotel in Cape Town.

Libya’s penalty kings, coached by Javier Clemente, the former Spanish boss, won 4-3 in sudden death in the shoot-out after it was 0-0 through 90 minutes and extra time at Cape Town Stadium.

Libya also won penalty shootouts in the quarterfinals and semifinals in South Africa.

The African Nations Championship is the continent’s lower-level tournament for home-based players, but that mattered little for the Libyans, whose best football achievement was watched by Sepp Blatter, FIFA’s president, at the former World Cup stadium.

Blatter handed out the medals to the Libyan players.

Mohamed Abdaula, Libya’s goal-keeper, saved the first two Ghanaian penalties to help the North Africans clinch victory in a tournament they were initially meant to host but had to give up to South Africa because of unrest at home.

Ghana’s penalty pain continued having been knocked out in shootouts in the semifinals at last year’s African Cup and the quarterfinals of the 2010 World Cup.

Historic win
Libya’s best result before Saturday’s triumph was reaching the final of the main African Cup on home soil in 1982, when it lost to Ghana on penalties.

It handed over hosting rights for this tournament and last year’s full continental championship following the overthrow of Moammar Gadhafi in 2011 and because of the ongoing violence.

But under Clemente, Libya’s footballers drew with Ghana in the group stage and beat Gabon and Zimbabwe in shootouts in the knockouts to progress to the deciding game.

In the final, Libya held their own and were even the more dangerous team in some stages and had two clear chances to score in extra time when Elmutasem Abuschnaf headed over from close range and Abdelsalam Omar also failed with a header.

Stephen Adams, Ghana’s goal-keeper, made important saves throughout the 120 minutes and also blocked two Libyan spot kicks to send the shootout to sudden death after the sides were level at 3-3 after five kicks each.

Ahmed El Trbi scored for Libya and Joshua Tijani pulled his penalty wide for the crucial miss, confirming Libya’s victory even though Mohamed Benouza, the Algerian referee, was not immediately certain that it was over and there was a slight delay before the Libyans could celebrate a meaningful feel-good moment for their long-troubled nation.

Libya will host the main African Cup of Nations in 2017.