Asari-Dokubo is a thug - El-Rufai 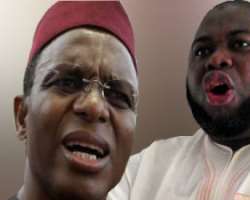 
The Interim Deputy National Secretary of the All Progressives Congress, Nasir El-Rufai, on Saturday referred to ex-Niger Delta militant leader, Mujahid Asari-Dokubo as a thug, saying there was no basis for comparing both of them.

El-Rufai said this during an interview with Sahara TV, while responding to a question on his 15-hour interrogation by the State Security Service.

When the one-time Minister of the Federal Capital Territory was asked if the name of Asari-Dokubo came up during the interrogation, he said no, and stressed that he could not have mentioned Asari-Dokubo's name because their personalities were not comparable.

Asari-Dokubo, who is known to be a supporter of President Goodluck Jonathan and his administration, has at different times expressed opinions in sharp contrast to those of El-Rufai.

Many Nigerians have questioned why the SSS has not invited Asari-Dokubo for questioning for saying, 'Nigeria will burn if President Jonathan is not reelected,' whereas El-Rufai was invited for saying, 'If 2015 elections are rigged it might likely lead to violence.'

Asari-Dokubo also reportedly called El-Rufai a coward following his (El-Rufai's) initial refusal to honour the invitation of the SSS.

During the interview El-Rufai also criticised the forthcoming national conference, describing it as a ploy to divert attention from the failures of Jonathan's administration.

He said the conference would be a waste of time and money and would not help the nation.

'I don't think that we need to spend N7bn to collect people with little legitimacy. It's an opportunity to create political division,' El-Rufai said.