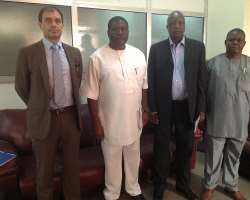 Speaking further, Imo Deputy said Governor Okorocha directed him to personally follow with the partnership with Rural Access and Mobility Project to ensure the Project begins in earnest. He further assured the National Coordinator of the Project and AFC representative that Imo State government has met up with the necessary technical and other conditions to participate in RAMP.

Prince Madumere averred the link between accessible road, infrastructure and industrialization cannot be over emphasized saying no meaningful investment, whether local of foreign, is possible without accessible roads and other structural facilities.

It will be recalled that Owelle Rochas Okorocha led Rescue Mission is constructing twenty kilometer Road in every local government in Imo State, 305 primary school blocks in 305 wards, renovating and reconstruction of community Health centers in autonomous communities with Community Government Council.

In their submissions, Engr. Ularamu and his AFC counterpart, Mr. Federic extolled the vision Imo State Government and promised to fast track all the needed processes since the Government has done its part.

Meanwhile, Imo Deputy in company of Accountant General of Imo State and Imo State Coordinator of RAMP, visited other institutions and Ministries like Ministry of Finance, World Bank and other development agencies, which their primary concern bother on development.