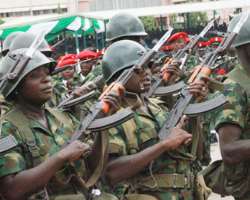 
The Nigeria Army School of Infantry, Jaji, Kaduna, on Friday said it trained 937 soldiers on counter terrorism as part of efforts to strengthen the fight against terrorism.

The participants, drawn from Army Headquarters, 7 Division and Nigerian Army Ordnance Corps (NAOC), had a six-week training in the school.

The Chief of Army Staff, Lt.-Gen. Kenneth Minimah, said the training was organised to prepare the soldiers to efficiently handle the current security challenges in the country.

He said as part of its efforts to fight against terrorism, the army established new Division in Borno state in the north east to add brigades and strengthen army operations.

“The current security challenges facing the country, most especially in the North East Zone of the country, has made the Nigerian Army concerted efforts in fighting against terrorisim,’' he said.

Represented by the General Officer Commanding, 1 Division of the Nigeria Army, Kaduna, Maj.-Gen Garba Wahab, Minimah commended the soldiers for their level of discipline and proficiency.

He directed them to deploy their new knowledge “to counter terrorists acts in real battle and other emergency situations”.

Minimah also directed them “to react swiftly and efficiently” during counter terrorism operations.

“It is the desire of the Nigeria Army to make you better professionals in your respective fields. This can only be achieved through continuos training.”

In his speech, the Commandant of the school, Maj.-Gen. Tukur Buratai, said the participants had distinguished themselves during the training and expressed confidence in their ability to rise to any security challenge.

He said: “Nigeria Army School of Infantry (NASI) has been a major facilitator and force multiplier in the fight against terrorism in Nigeria.''

He appreciated the support of the Army high command, saying that the school would continue to discharge its role more effectively.