Obasanjo and the rest of us 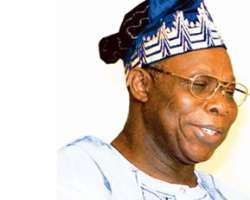 
GENERAL Olusegun Obasanjo is no stranger to our political lexicon or psyche.  An enigma of a kind, Obasanjo is touted as the embodiment of the values for the preservation or continuing corporate existence of this equally enigmatic polity.  Of course, the Nigerian nation state has been more than favourable to him.  A man of more than moderate intelligence or perspicacity but imbued with a large dosage of ardour and valour, our character sketch of Obasanjo will not be complete without our recognition of his curious dare-devilry.  He takes on most difficult tasks; revelling in dangerous assignments and daring open suicide or inducing hara-kiri.  His presumed connection with or his involvement in the January 15, 1966 coup d'etat that gave the military a foretaste of the juicy perquisites of governance in Nigeria is still shrouded in myth or mystery.  The leader of that adventure, Major Chukwuma Nzeogwu, is presumed to have been very close to Obasanjo.  The military putsch of Murtala Muhammed had produced Obasanjo as the second in command in that government suggesting his primacy of place or deep involvement in the risky enterprise of coup planning and execution.  However, against his 'wish and desire,' the mantle of leadership of that fast-paced [some will say, rash, brash or impetuous] administration fell on bashful or self-effacing Obasanjo when his boss was felled by the ravaging bullets of coupists who attempted to overthrow that government.  Obasanjo quickly rounded up; keeping apostolic faith with his avowed programme of hand-over to civilians.

In his retirement at his poultry farm in Ota, particularly during the supervening military interregnums of Babangida and Abacha, he found a new pastime in regularly running caustic commentaries, making acerbic remarks and jocularly but directly rebuking desultory or irresponsible conduct of political office holders.  His direct, palpable and undisguised verbal assault or attack on the Abacha administration methods brought him face to face with the wrath of the goggled Abacha and to the valley of the shadow of death. Condemned to be dispatched to the world beyond, an uncanny deus ex machina in the form of the mysterious death of the hangman was the denouement or final unravelling of the Obasanjo debacle or saga.  He emerged harassed and completely dilapidated.  Political pundits of the conservative hue however identified him as the solution to their continuing hegemony of the reins of government; they were quick to seize the opportunity. They propped him, rallied round him and provided him much-needed material support.  He stood for election as President winning even as the poll returns gave him a clear edge over his fellow compatriot, Olu Falae.

For eight years [representing two consecutive tenures], Obasanjo was President of the Federal Republic of Nigeria, straddling the entire atmosphere like a colossus and challenging all comers to distractive duels.  In office, he was prickly; offering primeval suggestions to issues of the moment.

So much hope and confidence had been built on his presidency.  Many were too conscious of his capacity to act with disinterestedness and dispatch in a structured situation.  But it turned out that his poise was purely personal and egotistical.  His presidency curiously lacked the definite purpose and direction which it had popularly excited at the beginning.

The sense of the failure of the Obasanjo presidency to confront or address the key issues of governance in Nigeria is rooted in our general lack of a profound sense of history.  None of us can be excused our present bewilderment respecting the failure of governance under Obasanjo and the years subsequent to his rule.  The events of the last 14 years of democratic rule in Nigeria are truly a cause for concern for all who care concerning the future and the image of the country.  The founding fathers of the nation could not, in their wildest imagination, have conceived of the morass and charade that have characterized the affairs of the nation.  It is submitted here however, that the solution to the myriad of the contrived and real crises of Nigeria is located in the interstices of her history.  How did we start?  What were our abiding objectives?  How did we set about achieving them?  What results did we post at startment? What plans did we put in place for the future?  What problems did we envisage?  The locus of our future growth and development is in our chequered history.

From the beginning, our system of identifying or choosing our leaders did not ensure competitiveness neither did it factor in the requirement to pick the best man or candidate for the job. Obasanjo impiously informed a startled nation in 1978 that the best candidate for the presidency would not win; that he stood no chance to win.  A nation that frustrates its first 11, that denounces skill and hands-on experience but invidiously promotes mediocrity and slovenliness is sure to err concerning the path of her true progress.  Most of our leaders have been reluctant or uninterested candidates dragged into the arena by self-serving interests and hangers-on.  Balewa, Shagari, Obasanjo, Yar'Adua, Jonathan - in their respective offices have been pawns in the opportunistic hands of their powerful acolytes.  It is to be noted that none of these had a clearly thought-out programme of action resulting from their considered rumination over the prognoses and diagnoses of our national challenges.  They had been willy-nilly programmed to play the cards of their sponsors or rabid supporters.  They became prisoners or legal captives to the promptings and suggestions of their band boys.

The dictum, 'no man ought to or be made to run for an office which he could not afford to hold if elected' has no place in the contemplation of the desperate.  Issues like manliness, personality and mental strength take the back seat in the consideration of the niggardly.  True, a nomination for office when it represents the deliberate, patriotic wish of one's party is often a call to duty which no man can or should refuse.

Shagari, in the throes of the pressure of opportunists and praise-singers, declared that he did not seek presidential nomination and cherished no higher ambition than to seek to perform the duties of the office of a Senator.  But the hawks in his party thought differently and mounted pressure on him to change his mind to run as President.  He ran even though he had no prepared blueprint concerning answers or solutions to the demands of his high office.  He waffled through his tenure presiding over a profligate administration in which great opportunities were squandered and little men ran the show. Only a self-intoxicated egoist can think of the Presidency without shivering at the burdens and responsibilities it entails.  Many of the seekers of that exalted office in Nigeria belong to that class.

Obasanjo's presidency graphically presents us with a classic case of a rude denial of the vigour, effervescence and correctness of the people's hopes and aspiration for a purposeful, determined and clear-headed administration.  Hopes were dashed and the future imperilled even as looming tragedies received cavalier responses or were impishly courted.  That the people expected no less than they had hoped for from Obasanjo's administration is foreshadowed by their knowledge of his experiential stint as military head of state which they had expected would stand him in good stead and afford him a good head-start.  He sure would do well, the people seemed to have believed.

This goodwill was, however, frittered away on the altar of insensitivity, desultoriness and in-adroitness.  For anyone who had such unique opportunity for reversing the trend of our impending shipwreck, Obasanjo's performance, or lack of it in office, is deserving of an open critique. The measure of our analysis or judgment will be the expectations of the people regarding key areas of governance - the economy, education, health, employment, housing, energy, power, roads and infrastructure, etc.  A deep sense of crisis of contradictions and all but irreconcilable differences had shifted the administration's gaze early away from what constitutes the cherished hopes and aspirations of the people. A radical current in the Nigerian intellectual sphere sought to help steer the drifting ship of state through sustained intellectual or scholarly engagement of the serious issues of governance.  But the substance and the accustomed mode of this engagement have

been deliberately cautious and its message lost on the chieftains of the administration.  Governance drifted on as if compass did not matter or count as an indispensable tool of peregrination.

All or most of the indices of a failed state - depravity, banditry, unimaginable or inexcusable poverty, insecurity, dilapidated or non-existent infrastructure, opportunistic politics and benumbing official or state corruption - were some of the high points of governance in Nigeria which festered or flourished under the Obasanjo presidency.  It may be a moot point that his self-appointment as our ombudsman rankles.  All must, however, agree that he is probably an inappropriate person to draw our attention to the prostrate or sorry state of things in contemporary Nigeria.  He is perceived, and so quite correctly, as having played a fundamental role in foisting on us all a sense of helplessness, regarding the ugly manifestations of the ingredients of what good or purposeful governance should not be. Impunity was the commanding height of governance under Obasanjo.  He promoted diversionary squabbles, encouraged factional politics and summoned subterfuge or deviousness as tools of statecraft.

Unfortunately, Obasanjo does not shoot through with a reverence for self-reconstruction or redemption.  His carriage suggests an unwavering bow or obeisance to the dictates of the philosophy of crass opportunism or of a bohemian lifestyle.  This devotional attitude is so strong as to prevent a proper engagement by him of the values of suavity, genteel conduct and the necessity to avoid verbosity or idle talkativeness all of which his high estate demands or decrees.

In the meanwhile, the rest of us are left in the lurch bemused or distracted from life's daily pursuits and from our covenant or ordained responsibilities which ordinarily ought to be made easy, convenient and worthwhile in the absence of distractive, perfidious and rascally or inept performance by state actors and their band of praise-singers or impish adulators.

• Rotimi-John, a lawyer and commentator on public affairs, contributed this piece from Abuja.