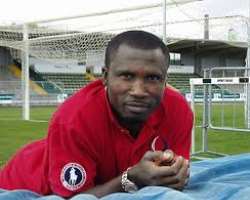 Uzoenyi has been the arrowhead of the Super Eagles attack at the ongoing African Nations Championship scoring three goals in four matches and winning the man of the match award thrice.

In a chat with Goal, Akpoborie made a case for the Enugu Rangers player to spearhead the Super Eagles attack ahead of the Russia-based forward.

'Ejike Uzoenyi has played well so far in the ongoing Africa Nations Championship and most especially in the quarter-final battle against Morocco which Nigeria won. This definitely throws a lot of question as regards why Ahmed Musa has been playing ahead of him in the Super Eagles,' Akpoborie told Goal in Abuja.

'Uzoenyi is a more creative player and a more sensible player. Musa is faster but Keshi has a lot of job on his hands to decide who makes the plane to Brazil.

'Musa creates goals but his finishing has been poor. Before the last Africa Cup of Nations and even the 2014 World Cup qualifiers, Musa had many chances but rarely buried them as expected of a player like him,' he said.

On why he thinks Uzoenyi is ahead of Musa, Akpoborie said the latter is guilty of losing possession.

'Musa concedes the ball to the opponent and in modern football you need somebody who is economical with the ball and makes his passes to his teammates most of the time, not every time,' he concluded.