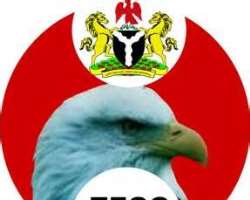 EFCC 2013 FUNDING AND MATTERS ARISING
Atta Emem
Many see it as a blunder. Others say they are not sincere. For me, I am interested in the facts of the claim that EFCC is broke, as made by its Secretary, Emmanuel Adegboyiga in December, 2013.

On the 16th of December, 2013, at the Senate Public hearing on the Nigerian Financial Intelligence Agency Bill in Abuja, the Secretary of the Economic and Financial Crimes Commission, EFCC, Mr. Emmanuel Akomaye declared to the entire world that the Commission was broke, adding that they had less than two million Naira in their accounts.

Prior to that, the Commission was reported to have had no funds to pay her lawyers, among other claims.

However, a look at the Commission's funding in 2013 and the status of its finance in the last quarter of the year suggests that the Commission is being economical with the truth. There is also an indication of massive corruption and looting going on in the Commission.

Several questions are still yearning for answers. First, why does EFCC need 700 police officials who are earning money from two statutory institutions (Nigerian Police Force and the EFCC)? Why are these Police officers appointed Directors, Deputy Directors and Assistant Directors in EFCC, while retaining their positions in the Police? Why can't the funds be used to create jobs and hire more than 700 graduates if EFCC really needs that number to perform its tasks? Are the policemen offering any value to EFCC or are they not deepening corruption within the ranks of EFCC?

Another area of concern is the corruption in the mismanagement of funds through the funding of the Special Control Unit on Money Laundering (SCUML). More than 60 personnel of the EFCC were posted to a Department called SCUML under the Ministry of Trade and Investment for more than 8 years without any justification and without any approval by the National Assembly.

EFCC is also funding the maintenance of SCUML's office in Abuja, Enugu, Port Harcourt and Kano. Sections 4 and 5 of the Money Laundering Prohibition (MLP) Act, 2011, as amended in 2013 empowers the Ministry to undertake a specific function and this is what led to the establishment of SCUML under the Ministry.This is one of the greatest tragedies of lack of transparency in the management of government resources.

Despite several requests from the National Assembly to EFCC to explain the reason why it is funding another Department in another Government's Agency that is not provided within its budget, EFCC has failed to provide any tangible response.

EFCC has also refused to give the National Assembly their Payroll and nominal roll register for the past eight years, despite several requests.

How can the EFCC claim that it does not have funds when it is funding the Police and the Ministry of Trade and Investment without any budgetary allocation?

Also, international Donor Funding to the Commission are not accounted for. EFCC has received so much from international development partners, both in terms of training, cash and equipment.

Till date, the Commission has refused to provide detailed breakdown of international support from donors to the National Assembly, following a formal request during an oversight visit in September 2013.

International donors that provided support to EFCC in 2013 include: British–DFID, DFID-Justice for all programme (J4A); World Bank Funding (through the Ministry of Finance); European Union through UNODC (over 30 million United States Dollars allocated to the EFCC from 2006 to 2011) and follow up funding from 2012 to 2015.

GIABA– the ECOWAS group based in Senegal and led by a Nigerian who is also a friend to Mr. Lamorde claimed to have donated $1million to EFCC in 2013 (approximately 160 million Naira). EFCC only reported $705,575.25 to the National Assembly during their oversight visit, without explaining what the funds were used for.

The governments of Norway, Canada and United States have provided various supports in cash and in kind over the past seven years.

Essentially, EFCC could have received in kind and cash, more than 5billion Naira from international development agencies in the past five years while at the same time deducting funds from the national budget. Who is auditing the accounts of EFCC?

Another worrisome development is the management of the Accounts of the Commission. EFCC Accounts are managed by Bukar Abba from Borno State, while the Internal Auditor, Alhaji Pate is from Adamawa (a brother to the EFCC Chairman, Lamorde). It is obvious that no amount of external auditing can achieve the desired result until the Accountant and the Auditor are removed and replaced by officers duly and transparently appointed to manage EFCC's finances.

Ultimately, the Economic and Financial Crimes Commission stinks and must be sanitized.

First, it is important that the Federal Government, through the Minister of Finance determines the difference in the funding between the actual number of staff in the EFCC payroll and the amount that is going into other institutions such as Police and the Ministry of Trade and Investment. This should be investigated and EFCC made to return the funds to the Treasury.

Also, the Minister of Finance should obtain information on funds provided by Donors and the difference in terms of what was budgeted and the actual utilization of these funds.

More so, government should review the way EFCC is managing funds recovered from Suspects. This has been a source of major concern to Nigerians and international partners. Funds recovered are kept by EFCC for more than five to six years without reference to the MFA during the pendency of the cases.

Investigations revealed that the National Assembly tried severally to obtain the relevant and required information on some of the above issues from the EFCC, to no avail.

It is unfortunate that an anti-corruption agency is involved in the funding of activities that are not within its mandate. How can an anti-corruption Agency that cannot account for funds provided by donors and national treasury hold others accountable?

Furthermore, there is need for a forensic audit through an external auditor to understand the fraud going on in EFCC. There are clear indications that the leadership is more interested in acquiring for personal interest than to fight corruption.

The international Organisations that render support the Commission should be requested to provide information on the level of support to EFCC.

The time to act is now!