Uncovered: The sex chamber of Libya’s Colonel Gaddafi where he raped girls – and boys – as young as 14 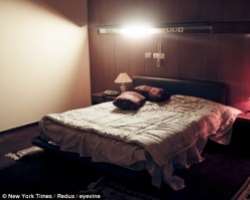 IT has been more than two years since the capture and death of Muammar Gaddafi, the Libyan dictator whose reign subjected an impoverished people to four decades of murder and terror.

When the bedraggled former leader was hauled out of a drainpipe and shot in October 2011, his death ended the bloody Nato-led civil war that had ravaged the country since the start of that year.

The full horror of his brutality has been slow to emerge, with many Libyans still fearing retaliation by those who continue to be loyal to their late leader. But it can now be revealed that the most heartbreaking of Gaddafi's victims include hundreds, possibly thousands of teenage girls who, throughout his 42-year reign, were beaten, raped and forced to become his sex slaves.

Many were virgins kidnapped from schools and universities and kept prisoner for years in a specially designed secret sex lair hidden within Tripoli University or his many palaces. In the 26 months since he was deposed, Gaddafi's den – where he regularly raped girls as young as 14 – has remained locked. But today its gaudy interior, where the colonel brutalised his victims, can be seen for the first time in photographs from a hard-hitting BBC4 documentary.

Inside the small, nondescript single-storey complex, the girls were forced to watch pornography to 'educate' them for their degrading treatment at the hands of Gaddafi. And even those who did manage to escape were often shunned by their deeply religious Muslim families who believed their family honour had been tainted.

When the dictator's body was dragged through the streets by a baying mob, just hours after he was beaten and shot in the head, the hastily convened transitional government moved swiftly to seal off the sex dungeon. They feared the full extent of Gaddafi's debased and lewd lifestyle would horrify the Western world and cause deep embarrassment to Libya.

One of the rooms holds little more than a double bed, lit by an orange lamp. Its 1970s decor and grimy Jacuzzi – all left exactly as they were when Gaddafi last used it – give it a seedy and gloomy air. But even more chilling is the clinical gynaecological suite in an adjoining room. It was here, on two beds fitted with stirrups behind a table laden with surgical instruments, that Gaddafi's young victims were examined to ensure they had no sexually transmittable diseases. And here they were forced to undergo abortions if they became pregnant.

They, however, were the lucky ones. Other young victims were so badly abused that they were dumped in car parks and on waste ground, and left to die.

Gaddafi's modus operandi was to tour schools and universities where female students were invited to his lectures.

As he spoke before his hushed audience, he would silently scan the room seeking out attractive girls. Before leaving he would pat those he had 'selected' on the head.

Within hours his private bodyguards would round up those chosen and kidnap them. If their families tried to keep them from Gaddafi's clutches, they were gunned down.

One teacher at a Tripoli school recalled how the girls were all very young. 'Some were only 14,' she said. 'They would simply take the girl they wanted. They had no conscience, no morals, not an iota of mercy even though she was a mere child.'

One mother, whose daughter was a student, said the community around Tripoli University lived in fear when a visit from the colonel was announced. 'The girls he wanted would be rounded up and sent to him,' she said.

'One just disappeared and they never found her again, despite her father and brothers searching for her. Another was found three months later, cut, raped and lying in the middle of a park. She had been left for dead.'

Even today, the Libyan people are afraid to speak openly about Gaddafi's depravity, fearing reprisals from his former henchmen.

But one woman – who was repeatedly raped by the despot over seven years from the age of 15 – has anonymously spoken of how he terrorised and abused her. She had been chosen to present the colonel with a bouquet when he toured her school in his home town of Sirte on the Mediterranean coast, 350 miles east of Tripoli.

When he patted her head afterwards, in an apparently paternal gesture, she thought she had pleased the man she and her fellow Libyans were forced to call 'the Guide'.

The next day three woman dressed in military uniform arrived telling her parents she was needed to present more flowers. Instead, she was driven at high speed to Gaddafi's lair. Once there, he barked at his women soldiers: 'Get her ready.'

The girl was stripped, given a blood test and shaved of all but her pubic hair. She was dressed in a G-string, forced into a low-cut gown and had thick make-up plastered on her face. When she was shoved into Gaddafi's room, to her horror he was lying naked on the bed. When she tried to run out, the women soldiers grabbed her and flung her back on the bed.

She was raped repeatedly during the seven years she was held captive, eventually escaping when a door was accidentally left unlocked.

Fuelled by cocaine and alcohol – and often Viagra – Gaddafi abused her horribly. 'I will never forget that first time, that moment,' she says. 'He violated my body and pierced my soul with a dagger. That blade will never come out.'

It took the documentary-makers months of negotiations to be allowed access to information on Gaddafi as Libya remains secretive and hide-bound by bureaucracy.

But they also established that Gaddafi set up a 'murder for hire' team run from Havana to rid him of enemies around the world. In a secret interview from Cuba, former CIA agent Frank Terpil said: 'I would say [it was] Murder Incorporated .  .  . murder for hire. Gaddafi thought that anybody who was a dissident, they [should be] eliminated, he had contracts out on a bunch of people in London.'

He often stored the bodies of those killed in Libya in freezers so that he could regularly view them.

If Gaddafi was power-crazed, he was also paranoid. A Brazilian plastic surgeon found himself escorted deep inside a bunker in Tripoli in the middle of the night in order to remove fat from Gaddafi's belly and inject it into his increasingly wrinkled face.

Despite the pain, Gaddafi refused a general anaesthetic, fearing he might be poisoned – and because he wished to remain alert. Halfway through the operation, he stopped to have a hamburger. He also created an elite squad of bodyguards – all female – whom he used for sex and forced to watch multiple barbaric executions.

For decades Gaddafi surrounded himself with these beautiful young women. Dressed in close-fitting military uniforms, with manicured nails and perfectly coiffed hair, they exuded glamour while toting guns.

But they were little more than disposable prostitutes used and abused by Gaddafi and his family.

Known as 'the Haris al-Has' – the private female guards – almost all were coerced into joining his cadre. One of them, who admits she had 'once adored him', recalled the horrific treatment they had to endure. 'Early one morning, at 2am, we were taken to a closed hall,' she said. 'We were to witness the murder of 17 students. We were not allowed to scream. We were made to cheer and shout. To act as though delighted by this display. Inside I was crying. They shot them all, one by one.'

According to Benghazi-based psychologist Seham Sergewa, who interviewed scores of the girls for the International Criminal Court, there were about 400 members of the elite squad over the years.

'A pattern emerged in their stories,' she explains. 'The women would first be raped by the dictator then passed on, like used objects, to one of his sons and eventually to high- ranking officials for more abuse.

'In one case a girl of 18 said she was raped in front of her father. She kept begging her distraught father to look away. Many of the victims say they contemplated suicide many times. Doubtless there were some who took their own lives.'

It has also emerged that teams of boys were sent to Gaddafi's sex den, where they too were abused. Former chief of protocol Nuri Al Mismari, who was at Gaddafi's side for 40 years, adds: 'He was terribly sexually deviant. Young boys and so on. He had his own boys. They used to be called the “services group”. All of them were boys and bodyguards .  .  . a harem for his pleasure.' One of the few Libyans who was prepared to be named and talk about the horrors Gaddafi inflicted on his people was Baha Kikhia, the widow of Libya's former foreign minister with whom Gaddafi had a frosty relationship.

When her husband vanished one evening, she confronted Gaddafi about his whereabouts. The colonel insisted he was being kept alive but, to Baha's horror, his body was one of many found in freezers after the regime fell.

'He liked to keep his victims in the refrigerators to look at them now and again,' she says haltingly. 'He would visit his victims.

'It was as though they were some sort of macabre souvenirs. Something that he could look at and touch to remind himself of his omnipotence. Some had been there as long as 25 years.'

The Libyan people had always known Gaddafi to be violent and unstable, but it was only after he was accused of perpetrating the Lockerbie bombing on December 21, 1988 – in which 270 American and British lives were lost when Libya blew up the Pan Am airliner on which they were travelling – that the West was prepared to take any action.

Strict sanctions were applied by America, although according to Gwenyth Todd, the former National Security Council Director for Libya at the White House, Western leaders – including Britain's then Prime Minister, Tony Blair – eventually sought to have them lifted and Gaddafi's reputation restored.

In 2001, Libyan Abdelbaset Ali Mohmed Al Megrahi was convicted of the Lockerbie bombing and jailed for life.

But eight years later, seriously ill with cancer, he was controversially released by the Scottish legal system on compassionate grounds –although many including Jim Swire, the father of one of the victims, maintain he was not guilty of the bombing.

The BBC4 documentary also suggests the Lockerbie jet was not the only one Gaddafi's regime blew up. Ali Aujali, Libya's former ambassador to Washington, insists Gaddafi was responsible for bringing down a civilian aircraft in 1992 within a day of the fourth Lockerbie anniversary, killing all 157 on board.

'Gaddafi shot down a Libyan jet just to send a message to the world that sanctions had hurt Libyan lives,' Aujali says. 'It was his way of showing the world how sanctions were affecting life in Libya – making it look as though the plane crashed because it needed spare parts which weren't available. It was 100 per cent down to Gaddafi.' Room where the victims were tested