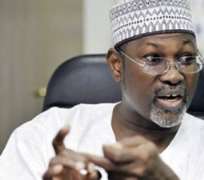 
Political pressure groups from the north have rejected staggered elections as contained in the timetable the Independent National Electoral Commission (INEC) released for the 2015 polls on Friday. They want all the elections to be conducted in one day.

In rejecting the sequence of the planned elections, the north's apex bodies - the Arewa Consultative Forum (ACF) and the Prof. Ango Abdulahi-led Northern Elders' Forum (NEF) - said the timetable prepared by INEC was designed to encourage electoral irregularities. They expressed fears that an attendant bandwagon effect was likely after the presidential election, which is the first. The two groups prefer the elections to be conducted the same day to ensure credibility.

But their Yoruba counterpart, Afenifere, said the ACF and NEF's demand is not in the interest of the system.

INEC had on Friday released the timetable for the 2015 elections, fixing the presidential and National Assembly elections for February 14, while the governorship and state houses of assembly polls will hold two weeks later.

Also yesterday, INEC released the details of the processes leading to the conduct of the general elections next year. The timetable showed that primary elections to fill positions within political parties would commence in October.

The commission specifically fixed October 2, 2014, for the beginning of party primaries and December 11, 2014, as the end of primaries including the resolution of disputes arising from the primaries of all political parties.

In a statement made available to LEADERSHIP Sunday, ACF said it was uncomfortable with the sequence of the election. Through its publicity secretary, Anthony Sanni, ACF said: 'We prefer all elections to hold the same day in order to reduce cost and avoid bandwagon effect. But INEC has said there is no enabling law by the National Assembly that will make it possible for the elections to hold the same day; and we have also called on the legislature to make that possible.

While expressing reservations about INEC's preparedness for the 2015 general elections, NEF's Abdullahi said there was nothing sacrosanct about the dates the electoral body had outlined for the polls.

'There is nothing so significant about the dates that have been reeled out by INEC; however, I do not see any reason for INEC's inability to conduct the elections the same day because it is possible and this is done all over the world, so Nigeria cannot be an exception in this case. 'Apart from the possible bandwagon effect that is likely to be associated with the current outline as enunciated by INEC, the likelihood of a winning presidential candidate in the February 14 poll manipulating the subsequent elections cannot be ruled out,' he said.

Mohammed called for Jega's sack, saying there was nothing to show that the INEC boss would follow the timetable as released.

'The issue is not whether or not the polls should hold same day; the issue is, how competent is Jega and his team of compromised INEC men and women? In my own opinion, INEC is partisan.

'So, who is fooling who in this country? The truth is that Jega is missing the point as far as this election timetable is concerned because he has done nothing to justify his continued stay as INEC chairman. You should remember that the same Jega released a timetable in 2011 but he bungled it. Registration was postponed several times and the election itself suffered serious logistical challenges owing to the incompetence of Jega and his team,' he said.

'Imagine what will happen if elections were to hold the same day; this is more so that Nigeria will witness a state of insecurity with the deployment of thugs by candidates on the same day,' Odumakin said.

Meanwhile, indications have emerged that the opposition All Progressives Congress (APC) may push for the conduct of the presidential and governorship elections the same day.

An APC chieftain confided in LEADERSHIP Sunday that the party might meet over the timetable next week.

'The leadership of the party is likely to meet next week to deliberate on the timetable; but, from all indications, leaders of the APC are more disposed to holding both the presidential and governorship elections the same day because we don't want to fall into the trap former president Olusegun Obasanjo set for the then Alliance for Democracy (AD) in 2003.'

When contacted, APC's interim national publicity secretary, Alhaji Lai Mohammed, said the party was yet to be officially notified by INEC. 'We are awaiting the official communication from INEC; until that is done, the party would prefer to reserve its comment on the timetable for now,' Mohammed said.

The campaigns are to end for the presidential and National Assembly elections on February 12, 2015, while those of governorship and state houses of assembly will stop on February 26, 2015.

The details of the schedule of activities for the general elections were contained in a statement signed by INEC secretary Mrs Augusta Ogakwu. The statement further indicated that publication of official register of voters for election will be on January 13, 2015, while the publication of list of nominated candidates for presidential and National Assembly elections will be on January 13, 2015.

According to Ogakwu,  the last day for submission of nomination forms by political parties in the presidential and National Assembly elections is January 6, 2015, while for the governorship and state houses of assembly it is January 20, 2015.

The list of nominated candidates for governorship and state houses of assembly will be published on January 17, 2015. Publication of notice of poll for all election will be displayed on January 18, 2015.

The commission also slated November 4-11, 2014, as date for collection of forms for all elections by political parties.

The publication of personal particulars of candidates (CF001) for presidential and National Assembly is fixed for December 25, 2014, while for the governorship and state houses of assembly elections it is January 1, 2015.

Submission of names of party agents for the election to electoral officers of local government areas or area councils is fixed for January 29, 2015, for presidential and National Assembly election, while February 12, 2015, was fixed for governorship and state houses of assembly elections.

The last date for the submission of Forms CF001 and CF002 at INEC headquarters is April 21. The commission will publish the particulars of candidates on April 28. – Leadership News