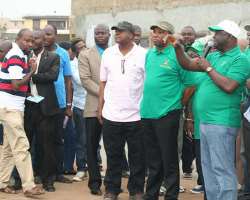 Just a year after Lagos government closed down the Ladipo Auto Spare Parts Market in Mushin Local Council Area of the state for violating environmental law, there are fears that the government may wield the big stick on the market again.

Apparently worried by the continuous failure on the part of the traders to keep to the agreement signed last year before the market was reopened, Governor Babatunde Fashola directed the authorities' surveillance on the market.

Commissioner for the Environment, Mr. Tunji Bello, who led the government's team to the market yesterday, said he had been asked by the governor to come and take on-the-spot assessment of the market.

Bello, who did not have any presence of the traders in his team, expressed disgust at the failure of the traders to keep to agreement, part of which said the markets should not to allow trading or activities on the expressway.

Accompanied by state officials, the commissioner personally reprimanded some of the traders and technicians, who displayed their wares by the roadside.

Bello said: 'We are here to conduct survey of the market. The governor directed that I should lead the team of surveillance. My brother, can you see the nuisance here? These people like whipping up sentiments. But we want the world to see that there is nothing attached other than maintaining law and order in the state'.

He added that when the market was shut last year, 'many well-meaning Nigerians intervened and we eventually reached a compromise with the marketers to keep the area clean in line with state's environmental law'. Bello said that rather than keep to the pact, that accord was always being breached.

Asked what would be the next line of action, Bello said he would report to the governor, who he noted, would direct on what next to do, but vowed: 'Certainly, the government would take appropriate action as and when due.'

On why the state Kick Against Indiscipline (KAI) could not curtail the traders, Bello said the body may not have the capacity to deal with the problem, adding that government would act appropriately.

In January last year, the government closed down the market reputed to be West Africa's largest auto spare-parts market over what it described as proven cases of environmental nuisance and abuse of public installations.

Officials of the Lagos State Taskforce on Environmental and Special Offences (Enforcement) Unit sealed off the multi-billion market almost one week after inspecting it and established gross abuse of public infrastructure and utilities.

Chairman of the taskforce, Mr. Bayonle Suleiman, had said then that the state government had issues with the market, ranging from hooliganism, lack of toilet facilities, degradation of the environment with diesel and fuel products. He added that the traders in the market formed another government.

He explained that the taskforce officials came to the market two weeks ago, but the leaders of the market did not show up.

'There are serious trading activities going on in the streets and there are lots of shanties here. We will make sure that this time around, proper sanitation is done by the traders before this market will be re-opened and they have to submit to the chairman of Mushin Local Council Area,' the task force boss said.