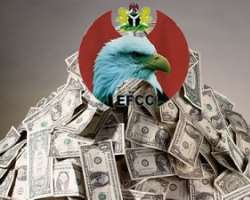 The EFCC, through one of its officers, Mr Abdullahi Mohammed, made the allegation at the resumed trial of Jubril before Justice Lateefat Okunnu.

The Witness testified that Jubril collected the sum from the Federal Government as  subsidy payment for petroleum product he never imported into Nigeria.

The News Agency of Nigeria (NAN) reports that Jubril is being prosecuted alongside his company– Brila Energy Ltd.- over alleged fraud.

Led in evidence by EFCC's counsel, Mr Seidu Atteh, Mohammed told the court that he was  part of the special team that investigated the alleged fraud in the Petroleum Support Fund (PSF) scheme.

The witness testified that the defendant obtained the said sum from the Federal Government under the pretext that he had imported the agreed 13,500 metric tonnes of Premium Motor Spirit (PMS) into Nigeria.

Mohammed said the EFCC investigations, however, revealed that the defendant rather than import the product, sourced the petroleum product from within the shores of Nigeria.

He said it was a false declaration from the defendant when he  “ claimed that there was a ship-to-ship transfer of the product between the mother vessel, MT Overseas Lima and the first daughter vessel, MT Delphina.''

Mohammed testified that although the defendant claimed the said transfer took place between Jan.26 and 27,2011 at off-shore Cotonou in Benin Republic, “but our investigations showed that MT Overseas Lima was not in West African coast at the time and period.

“Hence, it was impossible for the transfer to have taken place.”

Mohammed said the EFCC also wrote to Daddo Maritime, the owners of the second daughter vessel, MT Danni I, which eventually discharged the 13,000 metric tonnes of PMS at Obat Jetty, Lagos.

“From the documents they gave us, it showed that the defendant obtained the products from various ships using MT Danni I.”

Mohammed said, “it was only about 3,000 metric tonnes that the ship received from the first daughter vessel, MT Delphina ,while others came from within the shores of Nigeria.''

Cross-examined by the defence counsel, Mr Kola Kolade, the witness insisted that the EFCC conducted a proper investigation on the matter.

Mohammed said though Brilla Energy actually discharged the product at Obat Jetty, it was not qualified for the subsidy payment because the product was not imported in accordance with the law.

Okunnu adjourned the trial to Jan.23 for continuation (NAN)